Astronomers using NASA’s Interstellar Boundary Explorer (IBEX) satellite have mapped the boundary of the heliosphere, the vast region of space surrounding the Solar System that is filled with the solar wind.

The Earth-orbiting IBEX satellite detects particles that come from the heliosheath, the boundary layer between the Solar System and interstellar space.

Dr. Dan Reisenfeld from Los Alamos National Laboratory and colleagues used IBEX data to map the edge of this zone — a region called the heliopause. 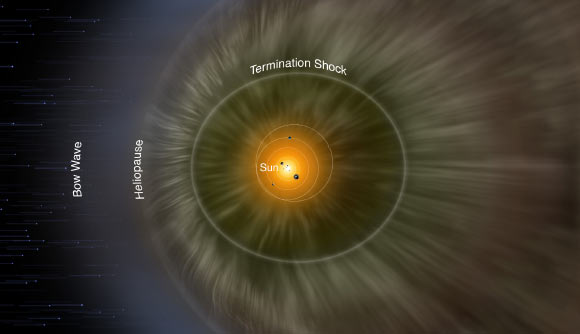 Reisenfeld et al. mapped the heliopause, which is the boundary between the heliosphere (brown) and interstellar space (dark blue).

Mapping the Heliosphere for the first time

The heliosphere is a bubble created by the solar wind, a stream of mostly protons, electrons, and alpha particles that extends from the Sun into interstellar space and protects the Earth from harmful interstellar radiation.
_________________

» Boundary of heliosphere mapped for the first time
» As Solar Wind Blows, Our Heliosphere Balloons
Current date/time is Fri May 20, 2022 1:24 am