Astronomers have made the rare sighting of two stars spiraling to their doom by spotting the tell-tale signs of a teardrop-shaped star.

The tragic shape is caused by a massive nearby white dwarf distorting the star with its intense gravity, which will also be the catalyst for an eventual supernova that will consume both.

Found by an international team of astronomers and astrophysicists led by the University of Warwick, it is one of only very small number of star systems that has been discovered that will one day see a white dwarf star reignite its core.

HD265435 is located roughly 1,500 light years away and comprises a hot subdwarf star and a white dwarf star orbiting each other closely at a rate of around 100 minutes. 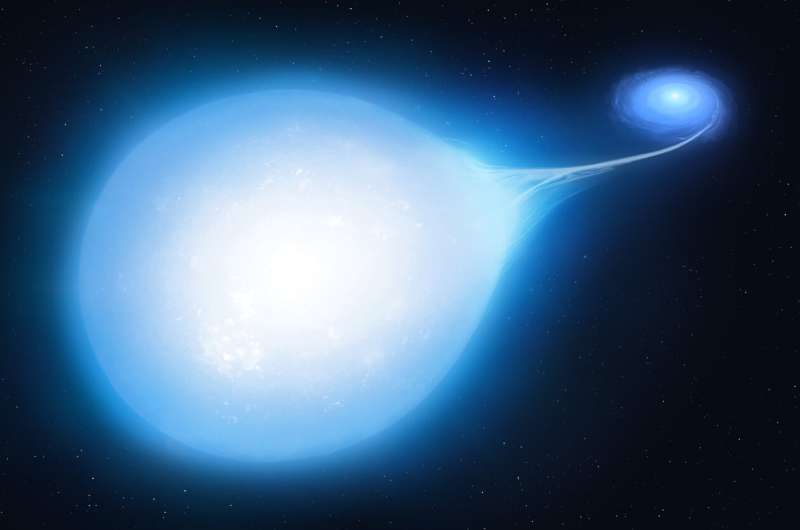 Artist's impression of the HD265435 system at around 30 million years from now, with the smaller white dwarf distorting the hot subdwarf into a distinct 'teardrop' shape.

Combined with the mass of the hot subdwarf, which is a little over 0.6 times the mass of our Sun, both stars have the mass needed to cause a Type Ia supernova.

As the two stars are already close enough to begin spiraling closer together, the white dwarf will inevitably go supernova in around 70 million years.

» Odd behavior of star reveals lonely black hole hiding in giant star cluster
» 'Pulsar in a box' reveals surprising picture of a neutron star's surroundings
» Hidden secrets of a massive star-formation region
» Weird star explosion is brightest supernova ever seen
» Neutron star may have been found in famous supernova
Current date/time is Fri May 20, 2022 12:59 am