Motions of a remarkable cosmic structure have been measured for the first time, using NASA's Chandra X-ray Observatory.

The blast wave and debris from an exploded star are seen moving away from the explosion site and colliding with a wall of surrounding gas.

Astronomers estimate that light from the supernova explosion reached Earth about 1,700 years ago, or when the Mayan empire was flourishing and the Jin dynasty ruled China.

However, by cosmic standards the supernova remnant formed by the explosion, called MSH 15-52, is one of the youngest in the Milky Way galaxy.

The explosion also created an ultra-dense, magnetized star called a pulsar, which then blew a bubble of energetic particles, an X-ray-emitting nebula.

Since the explosion the supernova remnant — made of debris from the shattered star, plus the explosion's blast wave — and the X-ray nebula have been changing as they expand outward into space.

Notably, the supernova remnant and X-ray nebula now resemble the shape of fingers and a palm.

Watch as the blast wave from an exploded star moves at nearly 9 million miles per hour.

This hand-shaped structure is a nebula of energy and particles blown by a pulsar left behind after the star exploded.

The blast wave is slamming into a wall of gas from a neighboring cloud, causing it to slow down. 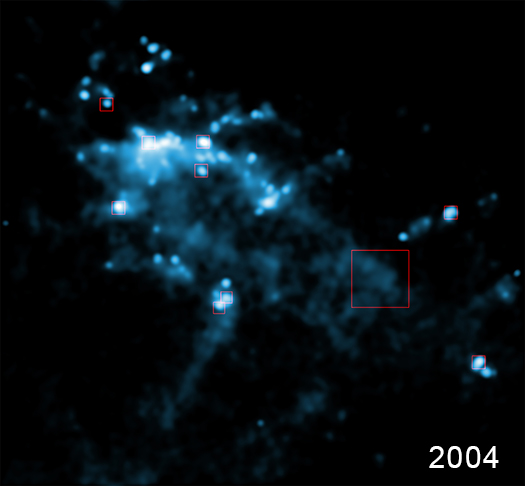 While these are startling high speeds, they actually represent a slowing down of the remnant.

Researchers estimate that to reach the farthest edge of RCW 89, material would have to travel on average at almost 30 million miles per hour.

The "hand" is actually a nebula of energy and particles generating by a pulsar.