Jupiter's planetary radiation environment is the most intense in the solar system.

NASA's Juno spacecraft has been orbiting the planet closer than any previous mission since 2016, investigating its innermost radiation belts from a unique polar orbit.

The spacecraft's orbit has enabled the first complete latitudinal and longitudinal study of Jupiter's radiation belts.

Becker et al. leverage this capability to report the discovery of a new population of heavy, high-energy ions trapped at Jupiter's midlatitudes. 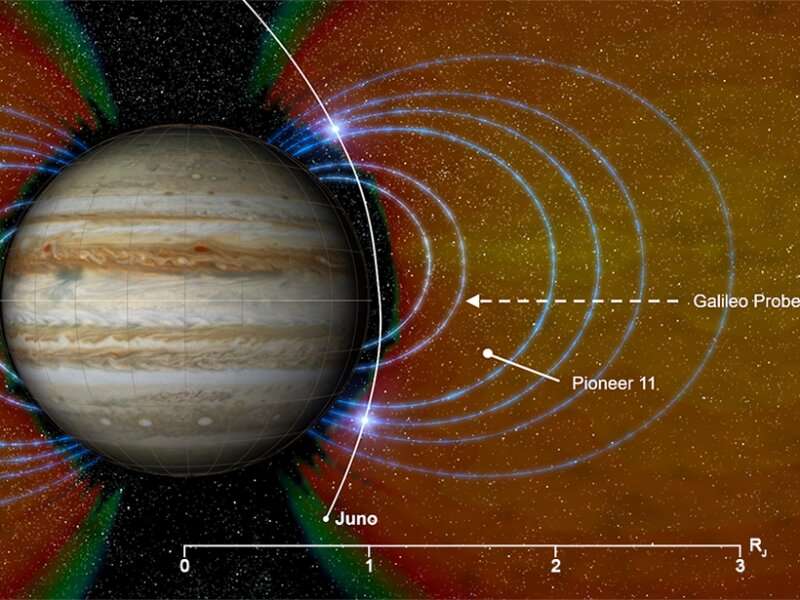 Juno has discovered a new population of highly energetic ions (bright blue spots) at midlatitudes within the inner edge of Jupiter’s relativistic electron belt, a region not previously explored.

The closest approach of Pioneer 11 to the planet and the path of the Galileo probe are also shown.

This animation shows the orbit of NASA's Juno spacecraft with respect to the giant planet's radiation belts.

The space around Jupiter is filled with electrically charged atomic particles -- electrons, protons and ions. (The bulk of this material comes from volcanoes on Jupiter's moon Io.)

These particles feel the force of Jupiter's powerful magnetic field and move in response to it.