Professional astronomers and citizen scientists from the NASA-funded Planet Hunters TESS project have discovered a two-planet system around the bright Sun-like star HD 152843.

HD 152843 is a G-dwarf star located about 352 light-years away in the northern constellation of Hercules.

Otherwise known as TOI-2319 or SAO 84691, the star is about the same mass as the Sun, but almost 1.5 times bigger and slightly brighter. 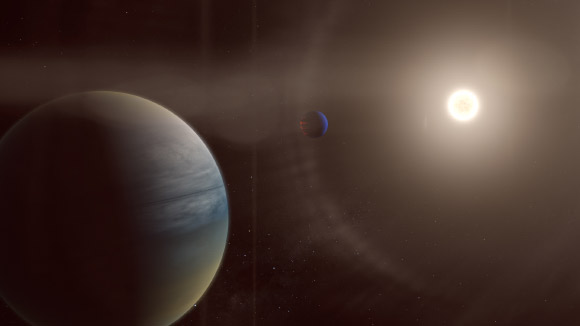 An artist’s rendering of the HD 152843 planetary system

On July 4, NASA’s Transiting Exoplanet Survey Satellite (TESS) completed its primary mission, a two-year-long survey that imaged about 75% of the starry sky.

In capturing this giant mosaic, TESS has found 66 new exoplanets, or worlds beyond our solar system, as well as nearly 2,100 candidates astronomers are working to confirm.

TESS monitors 24-by-96-degree strips of the sky, called sectors, for about a month using its four cameras.

The mission spent its first year observing 13 sectors comprising the southern sky and then spent another year imaging the northern sky.

Now in its extended mission, TESS has turned around to resume surveying the south.

In addition, the TESS team has introduced improvements to the way the satellite collects and processes data.

Its cameras now capture a full image every 10 minutes, or three times faster than during the primary mission.

The faster measurements will allow TESS to better resolve brightness changes caused by stellar oscillations and to capture explosive flares from active stars in greater detail.
_________________