In 2014, ESA's XMM-Newton spotted X-rays emanating from the massive star Rho Ophiuchi A and, last year, found these to ebb and flow periodically in the form of intense flares – both unexpected results. The team has now used ESO's Very Large Telescope to find that the star boasts a strong magnetic field, confirming its status as a cosmic lighthouse.

Stars like the sun are known to produce strong X-ray flares, but massive stars appear to be very different. In stars upwards of eight solar masses X-ray emission is steady, and no such star had been confidently observed to repeatedly flare in this part of the spectrum – until recently.

In 2014, a team of scientists used ESA's XMM-Newton space observatory to observe a massive star named Rho Ophiuchi A. This star sits at the heart of the Rho Ophiuchi Dark Cloud, a nearby region known to be actively forming new stars. Surprisingly, the data showed an abundance of X-rays streaming out from the star, prompting the team to look closer.

"We observed the star with XMM-Newton for almost 40 hours and found something even more unexpected," says Ignazio Pillitteri of the INAF–Osservatorio Astronomico di Palermo, Italy, and leader of the research team.

"Rather than a smooth, steady emission, the X-rays pulsed periodically outwards from Rho Ophiuchi A, varying over a period of roughly 1.2 days as the star rotated – like an X-ray lighthouse! This is quite a new phenomenon in stars bigger than the sun." 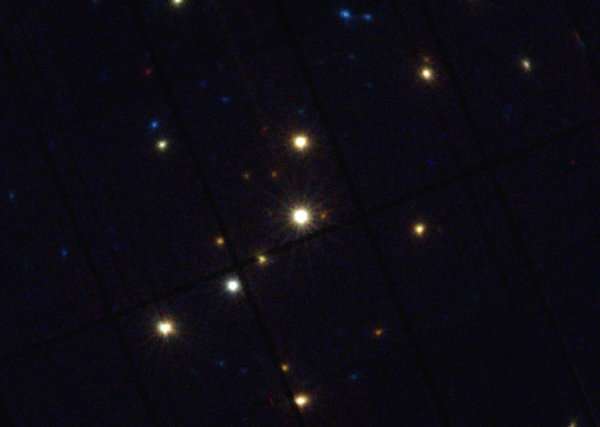 X-ray flares from Rho Ophiuchi A.

Zooming in on the Rho Ophiuchi star formation region in the constellation of Ophiuchus.

» Unraveling a spiral stream of dusty embers from a massive binary stellar forge
» XMM-Newton discovers scorching gas in Milky Way's halo
» The give and take of mega-flares from stars
» Remarkable flares from the galactic center
» Hubble Spies Barred Spiral Galaxy Edge-On
Current date/time is Fri May 20, 2022 1:36 am