Juno’s June 7, 2021 flyby of Ganymede is the closest a spacecraft has come to Jupiter’s largest moon since NASA’s Galileo spacecraft made its close approach back on May 20, 2000.

Ganymede has a diameter of 5,268 km (3,273 miles), around 8% larger than that of the planet Mercury and much larger than Pluto.

Discovered in 1610, it is the only moon in the Solar System to have its own magnetosphere, which causes aurorae in regions circling its north and south poles.

As Ganymede has no atmosphere, the surface at its poles is constantly being bombarded by plasma from the magnetosphere of Jupiter.

This bombardment has a dramatic effect on the moon’s ice. 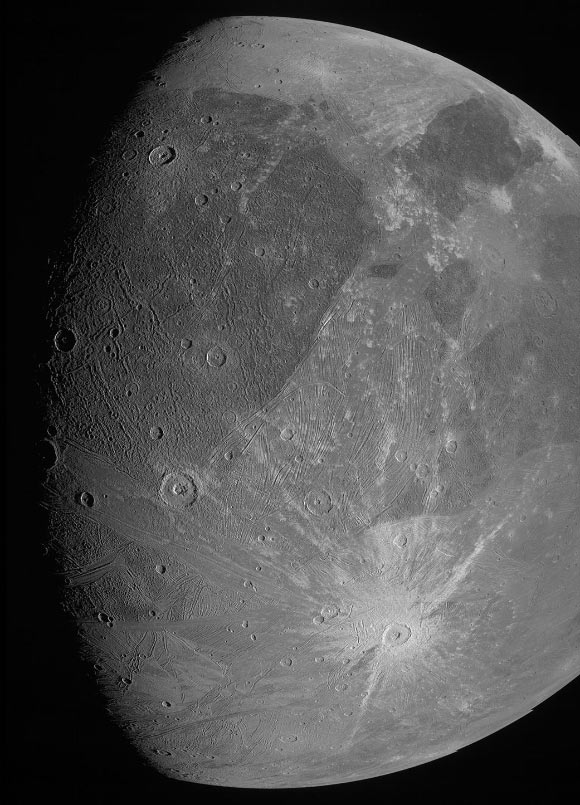 This image of Ganymede was obtained by the JunoCam imager aboard NASA’s Juno spacecraft during its June 7, 2021, flyby of the icy moon.

This image is a preliminary product — Ganymede as seen through JunoCam’s green filter.

Juno is a spin-stabilized spacecraft (with a rotation rate of 2 rpm), and the JunoCam imager has a fixed field of view.

To obtain Ganymede images as Juno rotated, the camera acquired a strip at a time as the target passed through its field of view.

These image strips were captured separately through the red, green, and blue filters. To generate the final image product, the strips must be stitched together and colors aligned.

At the time this preliminary image was generated, the spice kernels (navigation and other ancillary information providing precision observation geometry) necessary to properly map-project the imagery were not available.

The red, and blue filtered image strips were also not available.

When the final spice kernel data and images from the two filters are incorporated, the images seams (most prevalent on lower right of sphere) will disappear and a complete color image will be generated. 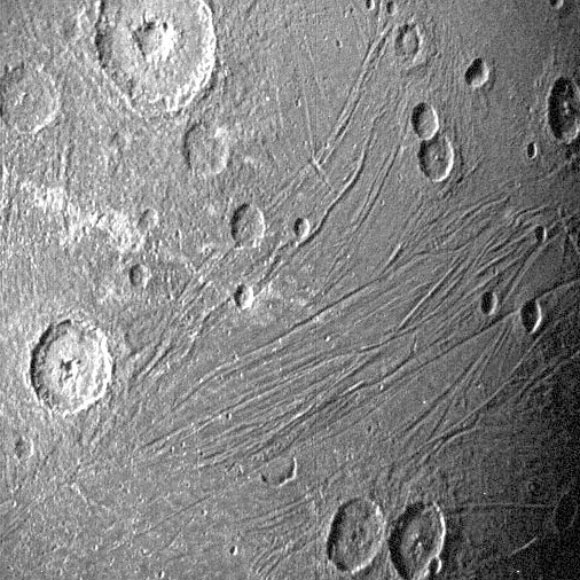 This image of the dark side of Ganymede was obtained by the Stellar Reference Unit star camera aboard NASA’s Juno spacecraft during its June 7, 2021, flyby of the icy moon.

Usually used to the spacecraft on course, the navigation camera was able to obtain an image of the moon’s dark side because it was bathed in the dim light scattered off Jupiter; the camera operates exceptionally well in low-light conditions.

NASA's Juno mission made the closest flyby of Jupiter's moon Ganymede in over 2 decades on June 7, 2021.