Beaming with the light of millions of suns

Beaming with the light of millions of suns

In the 1980s, researchers began discovering extremely bright sources of X-rays in the outer portions of galaxies, away from the supermassive black holes that dominate their centers. At first, researchers thought these cosmic objects, called ultraluminous X-ray sources, or ULXs, were hefty black holes with more than ten times the mass of the sun. But observations beginning in 2014 from NASA's NuSTAR and other space telescopes are showing that some ULXs, which glow with X-ray light equal in energy to millions of suns, are actually neutron stars—the burnt-out cores of massive stars that exploded. Three such ULXs have been identified as neutron stars so far.

Now, a Caltech-led team using data from NASA's Chandra X-ray Observatory has identified a fourth ULX as being a neutron star—and found new clues about how these objects can shine so brightly.

Neutron stars are extremely dense objects—a teaspoon would weigh about a billion tons, or as much as a mountain. Their gravity pulls surrounding material from companion stars onto them, and as this material is tugged on, it heats up and glows with X-rays. But as the neutron stars "feed" on the matter, there comes a time when the resulting X-ray light pushes the matter away. Astronomers call this point—when the objects cannot accumulate matter any faster and give off any more X-rays—the Eddington limit. 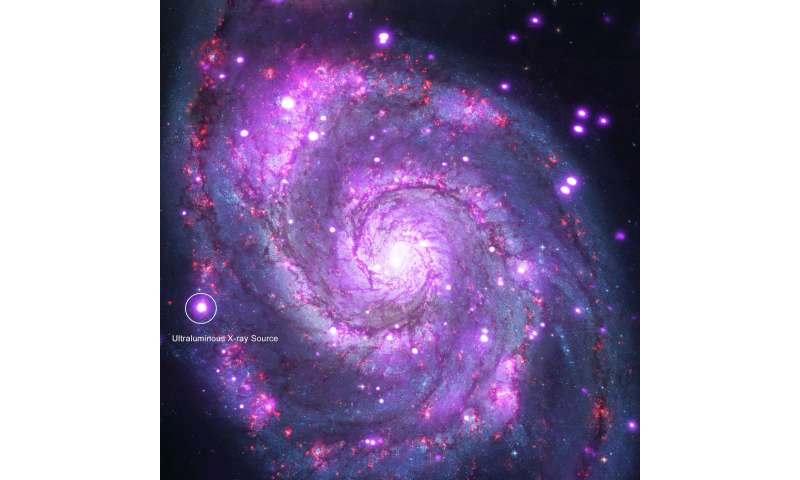 The Whirlpool galaxy, or M51. X-ray light seen by NASA's Chandra X-ray Observatory is shown in purple, and optical light from NASA's Hubble Space Telescope is red, green and blue. The ultraluminous X-ray source, or ULX, in the new Caltech-led study is indicated.

Like the Milky Way, the Whirlpool is a spiral galaxy with spectacular arms of stars and dust.

» Cassini: A Song of Ice and Light
» Earth is a Beaming Beacon in Kepler’s Eyes
» Hubble weighs in on mass of three million billion suns
» Spiritual Cleansing With Light
» Uranian moons in new light
Current date/time is Thu May 19, 2022 12:14 pm