Astronomers using ESO’s VLT Survey Telescope, a 2.6-m wide-field optical survey telescope at Paranal Observatory in Chile, have discovered 27 low-surface brightness galaxies — of which 12 are candidates for ultra-diffuse galaxies — in a large group of galaxies called the Hydra I cluster.

Ultra-diffuse galaxies are objects as large as the Milky Way but with 100-1,000 times fewer stars.

Discovered in 2015, these galaxies are extremely faint and lack star-forming gas, which makes them appear almost like a fluffy cosmic cloud.

Their origins remain uncertain, but astronomers speculate that they could be ‘failed’ galaxies that lost their gas supply early in their lifetimes. 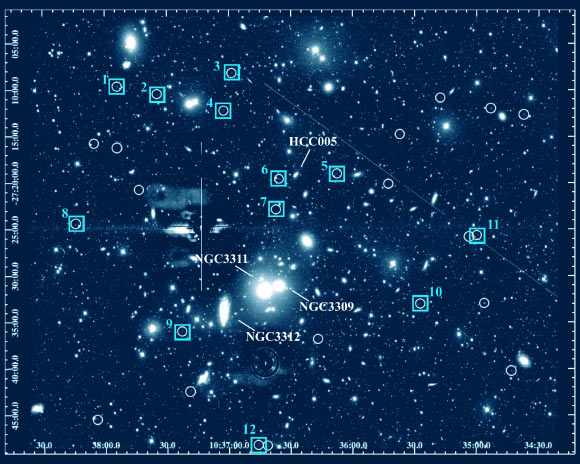 VST mosaic of the Hydra I: NGC 3311 and NGC 3309 are the two brightest cluster galaxies located close to the image center; the 27 low-surface brightness galaxies are marked as white circles; cyan squares show the 12 ultra-diffuse galaxies.

» Ultra-bright early galaxies may be less common than we think
» Hot X-ray glow from massive cluster of galaxies
» Hubble Spots Enormous Galaxies in Perseus Cluster
» Hubble catches a colossal cluster
» Galaxies that feed on other galaxies
Current date/time is Wed May 18, 2022 5:09 pm