An unexpected form of electrical discharge, ‘shallow lightning’ originates from Jovian clouds containing an ammonia-water solution, according to a new analysis of data collected by the Stellar Reference Unit instrument onboard NASA’s Juno spacecraft.

Since NASA’s Voyager mission first saw Jovian lightning flashes in 1979, it has been thought that the planet’s lightning is similar to Earth’s, occurring only in thunderstorms where water exists in all its phases — ice, liquid, and gas.

At Jupiter this would place the storms around 45 to 65 km (28-40 miles) below the visible clouds, with temperatures that hover around 0 degrees Celsius (32 degrees Fahrenheit). 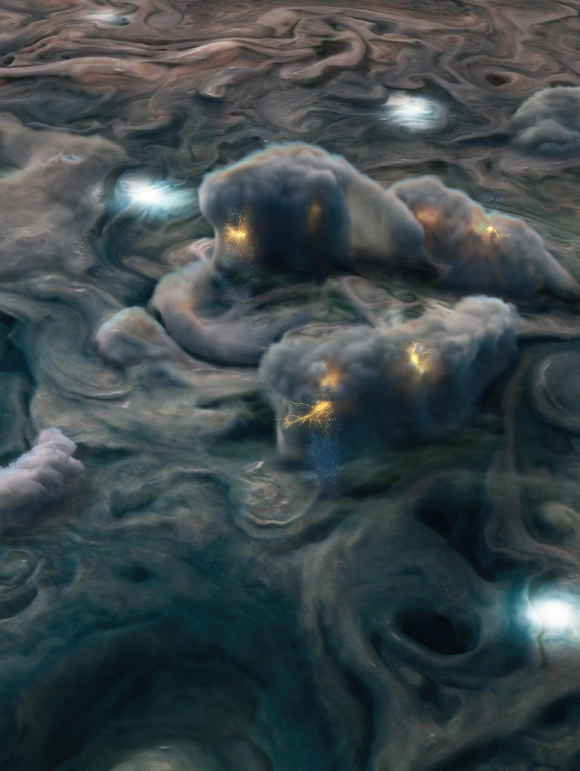 This animation takes the viewer on a simulated journey into Jupiter’s exotic high-altitude electrical storms.

Get an up-close view of Mission Juno’s newly discovered “shallow lighting” flashes and dive into the violent atmospheric jet of the Nautilus cloud.

The smallest white “pop-up” clouds on top of the Nautilus are about 100 km across. The ride navigates through Jupiter’s towering thunderstorms, dodging the spray of ammonia-water rain, and shallow lighting flashes.

At these altitudes -- too cold for pure liquid water to exit – ammonia gas acts like an antifreeze that melts the water ice crystals flung up to these heights by Jupiter’s powerful storms – giving Jupiter an unexpected ammonia-water cloud that can electrify the sky.
_________________