Scientists have described a new species of the frog genus Brachycephalus from the forests of the Brazilian state of São Paulo.

Brachycephalus is a genus of miniaturized frogs that live in the forest leaf litter and are most active during daylight.

Commonly known as pumpkin toadlets, these frogs are endemic to the Brazilian Atlantic Forest, eastern Brazil, and are spread along almost 1,700 km, from Santa Catarina to southern Bahia states.

Regardless of genus distribution, most species occur in restricted lowlands or mountains areas, where some representatives seem to occupy less than 100 ha of area. 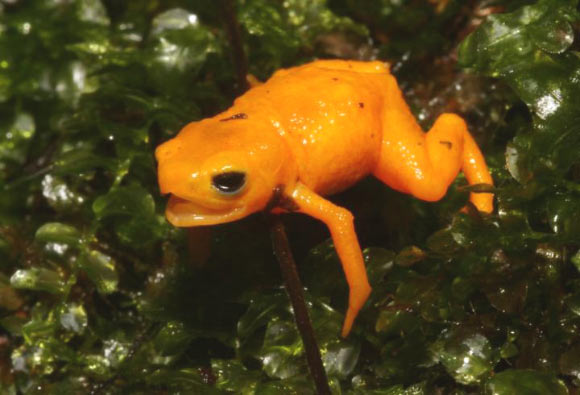 “Brachycephalus rotenbergae’s colors may work as a camouflage in their microhabitat, since there are great amounts of tiny yellow and orange leaves, mushrooms and seeds on the ground, especially during the active season,” the researchers said.

The orange frog has a rounded snout, dark spots on parts of the skull and a specific acoustic profile to its chirps that are different from already-named pumpkin toadlets.

Rather than living at the water’s edge, the new pumpkin toadlet is mostly active during the day on the forest floor.

And its bright colors might be even more important than its song for communicating with other frogs.
_________________