The NASA/ESA Hubble Space Telescope has produced an outstanding image of an emission nebula called NGC 2313.

NGC 2313 is an emission nebula located approximately 3,756 light-years away in the constellation of Monoceros.

Also referred to as LDN 1653 and Parsamyan 17 in astronomical catalogues, the nebula was discovered on January 4, 1862 by the German astronomer Heinrich Louis d’Arrest.

The new image of NGC 2313 is made up of observations from Hubble’s Advanced Camera for Surveys (ACS) instrument in the near-infrared and optical parts of the spectrum. 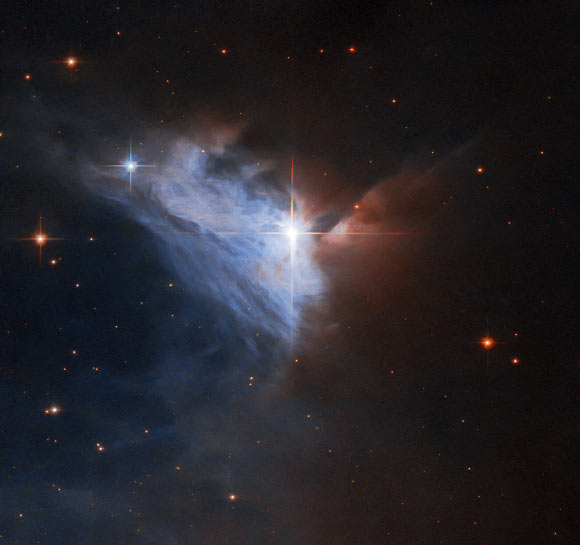 NGC 2313 is an emission nebula located approximately 3,756 light-years away in the constellation of Monoceros.

Also referred to as LDN 1653 and Parsamyan 17 in astronomical catalogues, the nebula was discovered on January 4, 1862 by the German astronomer Heinrich Louis d’Arrest.

NGC 2313 is energized by a bright and young intermediate-mass star called V565.

“V565 — surrounded by four prominent diffraction spikes — illuminates a silvery, fan-shaped veil of gas and dust, while the right half of this image is obscured by a dense cloud of dust,” Hubble astronomers said.

The unusual variable star V838 Monocerotis (V838 Mon) continues to puzzle astronomers. This previously inconspicuous star underwent an outburst early in 2002, during which it temporarily increased in brightness to become 600,000 times more luminous than our Sun.

Light from this sudden eruption is illuminating the interstellar dust surrounding the star, producing the most spectacular "light echo" in the history of astronomy.
_________________

Plunging Into An Emission Nebula

In this artist's impression, we dive into an emission nebula and fly close to giant young stars.

Emission nebulae are clouds of dust and gas that are hot enough that they glow on their own, as opposed to reflection nebulae, which shine from the reflected light of nearby stars.
_________________

» Unusual laser emission in the Ant Nebula suggests hidden double star system
» Natural Radio Emission from Ionosphere of Venus
» Emission from the centre of a galaxy has a serpentine shape
» Multiple gamma-ray emission regions detected in the blazar 3C 279
» Light echos in the Eta Carinae Nebula
Current date/time is Fri May 20, 2022 1:13 am