Phonognatha graeffei, referred to as the leaf curling spider, is a common Australian spider found in woodlands and urban areas in the northeastern, eastern and southern states.

A small member of the family Araneidae, the orb-weavers, it was previously placed in Tetragnathidae.

The spider is distinguished by having a curled leaf at the centre of its web, in which it shelters.

The species form pairs living together in the same leaf, though at opposite ends of their shelter, even before mating at maturity.

The female creates a separate curled leaf "nursery" hung in foliage nearby.

The web, with its shelter at the centre, is easily identifiable.

The leaf curling spider cleverly weaves a leaf or other object into the centre of its web as a hide-away from birds and other predators.

Leaves are twisted along their length to form a funnel, (sometimes with a silk wall on one side, if necessary) that the spider can retreat into. 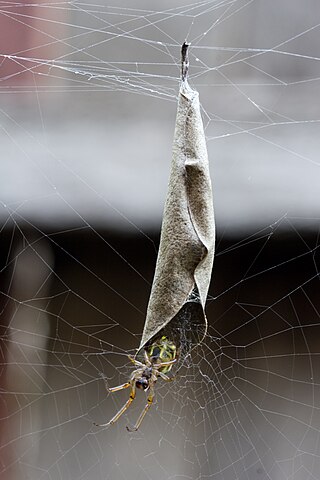 Phonognatha graeffei or Leaf curling spider in its retreat with web in an Australian garden.

This amazing ' rolled leaf spider', genus Poltys, was documented for the 1st time in India at Mojo Plantation.

» Tea Leaf Readings - 3 Spaces
» Slingshot Spider
» A-Z of shapes and their symbolism. Tea Leaf readings & other Divination forms
» Meet the Spider With One of the Fastest Spins on the Planet
» World's oldest spider discovered in Australian outback
Current date/time is Sun Jul 03, 2022 4:00 pm