Astronomers have used NASA's Hubble Space Telescope to make the most precise measurements of the expansion rate of the universe since it was first calculated nearly a century ago. Intriguingly, the results are forcing astronomers to consider that they may be seeing evidence of something unexpected at work in the universe.

That's because the latest Hubble finding confirms a nagging discrepancy showing the universe to be expanding faster now than was expected from its trajectory seen shortly after the big bang. Researchers suggest that there may be new physics to explain the inconsistency. 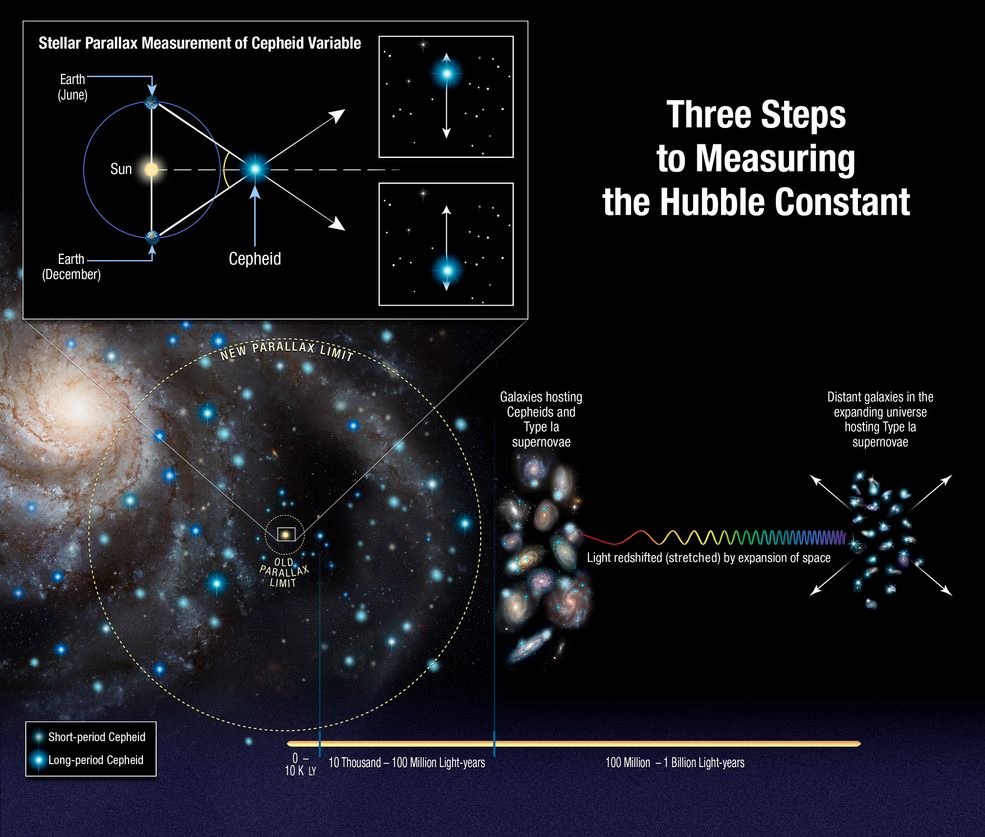 This illustration shows three steps astronomers used to measure the universe's expansion rate (Hubble constant) to an unprecedented accuracy, reducing the total uncertainty to 2.3 percent. The measurements streamline and strengthen the construction of the cosmic distance ladder, which is used to measure accurate distances to galaxies near to and far from Earth. The latest Hubble study extends the number of Cepheid variable stars analyzed to distances of up to 10 times farther across our galaxy than previous Hubble results.

These Hubble Space Telescope images showcase two of the 19 galaxies analyzed in a project to improve the precision of the universe's expansion rate, a value known as the Hubble constant. The color-composite images show NGC 3972 (left) and NGC 1015 (right), located 65 million light-years and 118 million light-years, respectively, from Earth. The yellow circles in each galaxy represent the locations of pulsating stars called Cepheid variables.

Less than a century ago, the bright arc of our Milky Way was thought to contain all the stars in the universe. But, astronomers were perplexed by a cigar-shaped object in the autumn sky called the Andromeda nebula. Some astronomers thought it was another galaxy like our Milky Way. It too had a flattened-disk shape.

But how far away was it? In the early 1920s, astronomer Edwin Hubble photographed the nebula in detail. He found a pulsating star hidden deep in one of its spiral arms. Edwin Hubble used it to calculate the distance to the Andromeda nebula. This showed it was far beyond our Milky Way.

Andromeda in fact was really a separate galaxy. The Hubble Space Telescope has recently observed the star as a tribute to the landmark discovery. The video series of photo illustrations shows the predicted merger between our Milky Way galaxy and the neighboring Andromeda galaxy, as it will unfold over the next several billion years.

» How we discovered the strange physics of jets from supermassive black holes
» Five true stories that prove Multiple Dimensions exist (Quantum Physics)
» Cassini Finds Fresh Ice in Northern Hemisphere of Enceladus
» China's fresh moon rocks are younger than the Apollo samples
» Where is the universe's missing matter?
Current date/time is Thu May 19, 2022 1:03 pm