Some black holes erase your past

Some black holes erase your past

In the real world, your past uniquely determines your future. If a physicist knows how the universe starts out, she can calculate its future for all time and all space.

But a UC Berkeley mathematician has found some types of black holes in which this law breaks down. If someone were to venture into one of these relatively benign black holes, they could survive, but their past would be obliterated and they could have an infinite number of possible futures.

Such claims have been made in the past, and physicists have invoked "strong cosmic censorship" to explain it away. That is, something catastrophic – typically a horrible death – would prevent observers from actually entering a region of spacetime where their future was not uniquely determined. This principle, first proposed 40 years ago by physicist Roger Penrose, keeps sacrosanct an idea – determinism – key to any physical theory. That is, given the past and present, the physical laws of the universe do not allow more than one possible future.

But, says UC Berkeley postdoctoral fellow Peter Hintz, mathematical calculations show that for some specific types of black holes in a universe like ours, which is expanding at an accelerating rate, it is possible to survive the passage from a deterministic world into a non-deterministic black hole. 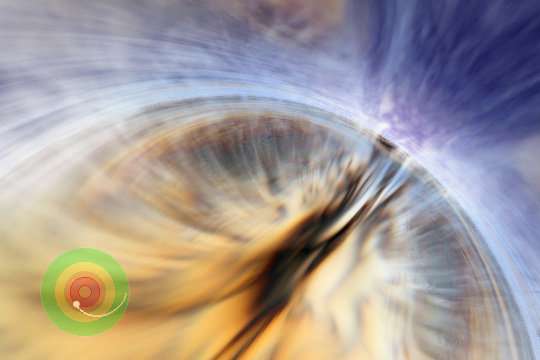 Passing through the outer or event horizon of a black hole would be uneventful for a massive black hole. Animation by Andrew Hamilton, based on supercomputer simulation by John Hawley.

A new mathematical solution shows that the past of an object inside certain black holes can be erased and that this does not determine its future.