Astronomers reveal a new high resolution map of the magnetic field lines in gas and dust swirling around the supermassive black hole at the centre of our Galaxy, published in a new paper in Monthly Notices of the Royal Astronomical Society. The team, led by Professor Pat Roche of the University of Oxford, created the map, which is the first of its kind, using the CanariCam infrared camera attached to the Gran Telescopio Canarias sited on the island of La Palma.

Black holes are objects with gravitational fields so strong that not even light can escape their grasp. The centre of almost every galaxy appears to host a black hole, and the one we live in, the Milky Way, is no exception. Stars move around the black hole at speeds of up to 30 million kilometres an hour, indicating that it has a mass of more than a million times our Sun.

Visible light from sources in the centre of the Milky Way is blocked by clouds of gas and dust. Infrared light, as well as X-rays and radio waves, passes through this obscuring material, so astronomers use this to see the region more clearly. CanariCam combines infrared imaging with a polarising device, which preferentially filters light with the particular characteristics associated with magnetic fields. 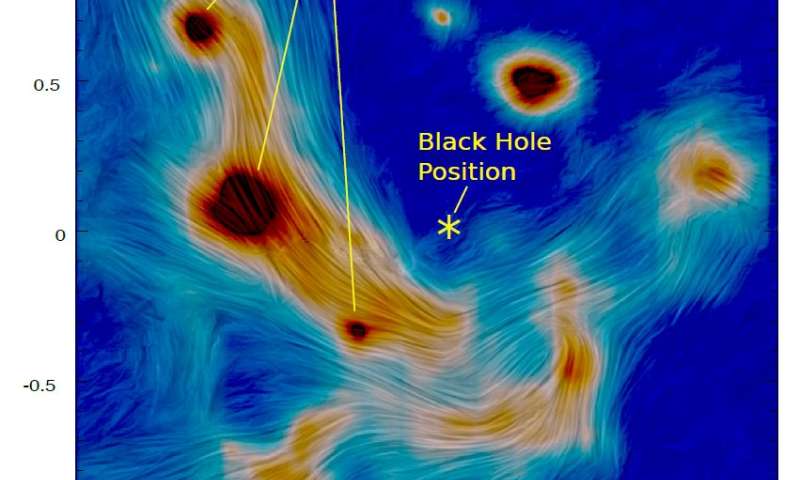 The colour scale in the image shows the amount of infrared (heat) radiation coming from warm dust particles in the filaments and luminous stars within a light year of the Galactic centre. The position of the black hole is indicated by an asterisk. The lines trace the magnetic field directions and reveal the complex interactions between the stars and the dusty filaments, and the impact that they and the gravitational force has on them. The observations were made with the largest telescope in Europe, which allowed details of the fine structure in the magnetic fields to be revealed for the first time.

Zoom in on the pulsar PSR J1745-2900 that has helped astronomers discover a powerful magnetic field around the monster black hole Sagittarius A* at the center of our Milky Way Galaxy.

This week, astronomers discovered that the supermassive black hole at the center of our galaxy has a magnetic field! Spinning stars help make planets habitable, and NASA loses contact with STEREO-B.