K2-290A, the primary star in the triple stellar system K2-290, is tilted by 124 degrees compared with the orbits of both of its known planets, and has a wide-orbiting companion that is capable of having tilted the protoplanetary disk.

In 2019, two transiting planets were discovered around the primary star in the K2-290 system.

The inner planet, K2-290Ab, has an orbital period of 9.2 days and a radius of 3 Earth radii, making it a hot sub-Neptune. 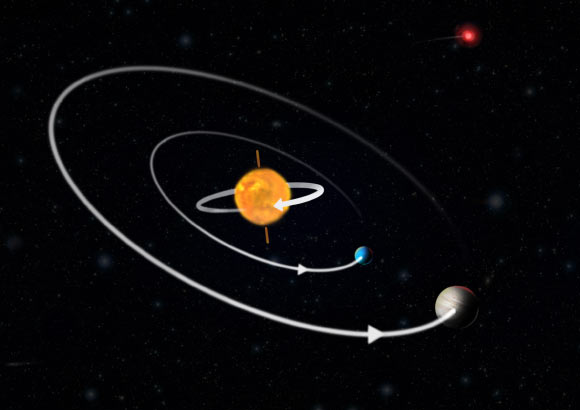 An artist’s impression of the K2-290 system.

» First image of a multi-planet system around a sun-like star
» chaotic star system reveals planet formation secrets
» Mysterious spinning neutron star detected in the Milky Way
» Closest planet ever discovered outside solar system could be habitable with a dayside ocean
» Did a rogue star change the makeup of our solar system?
Current date/time is Wed Sep 28, 2022 11:33 am