Using data from NASA’s Fermi Space Telescope and the enormous computing power of the citizen science project Einstein@Home, astronomers have found that PSR J2039-5617, a gamma-ray pulsar rotating 377 times a second, is in orbit with a stellar companion with a mass of about 0.15 solar masses.

Millisecond pulsars are ancient neutron stars that have been spun-up to millisecond rotation periods by the accretion of matter from an orbiting companion star.

The most compelling evidence for this ‘recycling’ scenario comes from the discovery of three transitional millisecond pulsars, which have been seen to switch between rotationally powered millisecond pulsar and accretion-powered low-mass X-ray binary states. 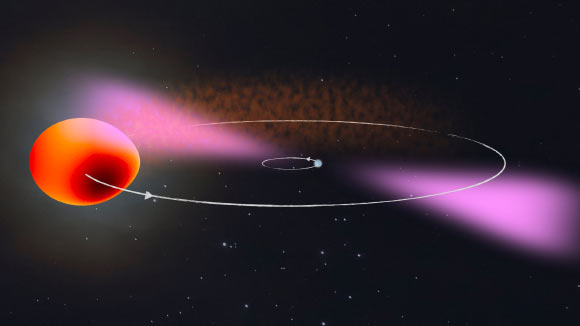 Redbacks, and the closely related ‘black widows,’ are named after species of spiders in which the heavy females have been observed to consume the smaller males after mating, reflecting the fact that the lighter companion stars are being destroyed by the pulsar’s particle wind and/or intense high-energy radiation.

n late June 2013, an exceptional binary system containing a rapidly spinning neutron star underwent a dramatic change in behavior never before observed. The pulsar's radio beacon vanished, while at the same time the system brightened fivefold in gamma rays, the most powerful form of light, according to measurements by NASA's Fermi Gamma-ray Space Telescope.

The system, known as AY Sextantis, is located about 4,400 light-years away in the constellation Sextans. It pairs a 1.7-millisecond pulsar named PSR J1023+0038 -- J1023 for short -- with a star containing about one-fifth the mass of the sun.

The stars complete an orbit in only 4.8 hours, which places them so close together that the pulsar will gradually evaporate its companion.
_________________