NGC 1097 lies in the southern constellation Fornax at a distance of only 45 million light-years.

This galaxy was discovered by the German-British astronomer William Herschel on October 9, 1790.

At magnitude 9.5, and thus just 25 times fainter than the faintest object that can be seen with the unaided eye, it appears in small telescopes as a bright, circular disk. 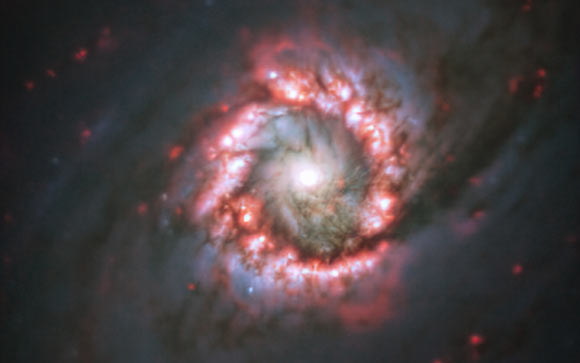 » Feeding a galaxy's nuclear black hole
» Bursting pulsar found to 'hiccup' during crucial stage of its lifecycle
» Odd behavior of star reveals lonely black hole hiding in giant star cluster
» The Milky Way could be spreading life from star to star
» Postcard from the Ring Plane
Current date/time is Sat May 21, 2022 4:42 pm