In 2020, astronomers added a new member to an exclusive family of exotic objects with the discovery of a magnetar. New observations from NASA's Chandra X-ray Observatory help support the idea that it is also a pulsar, meaning it emits regular pulses of light.

Magnetars are a type of neutron star, an incredibly dense object mainly made up of tightly packed neutron, which forms from the collapsed core of a massive star during a supernova.

What sets magnetars apart from other neutron stars is that they also have the most powerful known magnetic fields in the universe. For context, the strength of our planet's magnetic field has a value of about one Gauss, while a refrigerator magnet measures about 100 Gauss. Magnetars, on the other hand, have magnetic fields of about a million billion Gauss.

If a magnetar was located a sixth of the way to the Moon (about 40,000 miles), it would wipe the data from all of the credit cards on Earth. 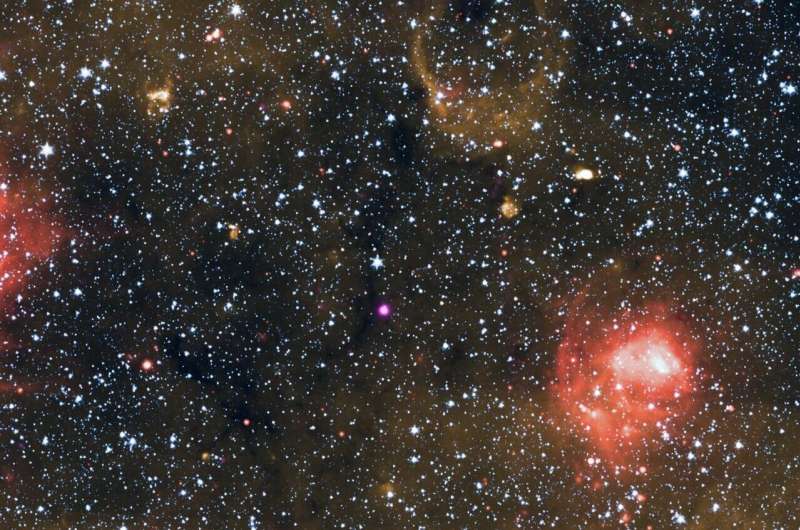 This image contains an exceptional magnetar, a type of neutron star with very powerfulmagnetic fields. Astronomers have found evidence that this object may be the youngest knownmagnetar (about 500 years old in Earth's timeframe).

It is also the fastest rotating one yet discovered(spinning about 1.4 times per second).

This image shows the magnetar in X-rays from Chandra (purple)at the center of the image in combination with Spitzer and WISE infrared data showing the wider field ofview. Magnetars form when a massive star runs out of nuclear fuel and its core collapses onto itself.

Astronomers recently found the fastest spinning and possibly the youngest magnetar yet.