Also known as Abell 426, it is one of the most massive objects in the observable Universe, containing over 1,000 galaxies immersed in a vast gas cloud. 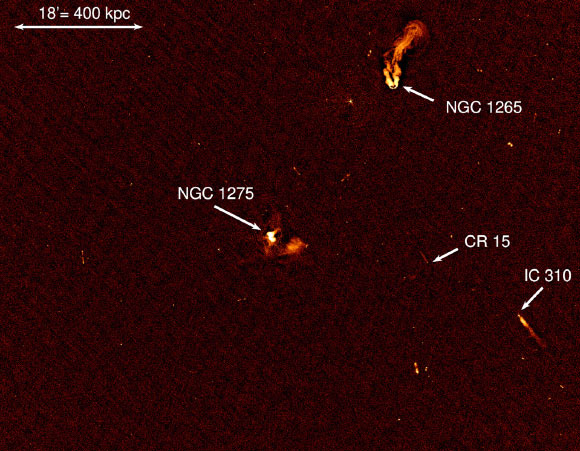 The central part of the total field of view of the VLA radio map of the Perseus cluster. NGC 1275 is the bright source in the middle of the image. 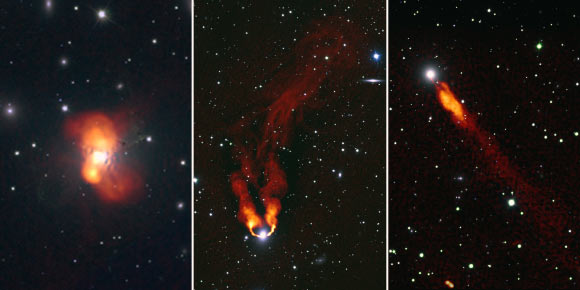 Left: NGC 1275, at the core of the cluster, is seen in new detail, including a newly-revealed wealth of complex, filamentary structure in its radio lobes.

Center: NGC 1265 shows the effects of its motion through the tenuous material between the galaxies; its radio jets are bent backward by that interaction, then merge into a single, broad tail; the tail then is further bent, possibly by motions within the intergalactic material.

Right: the jets of IC 310 are bent backward, similarly to NGC 1265, but appear closer because of the viewing angle from Earth; that angle also allows astronomers to directly observe energetic gamma rays generated near the supermassive black hole at the galaxy’s core.

Combining data from NASA's Chandra X-ray Observatory with radio observations and computer simulations, scientists have found a vast wave of hot gas in the nearby Perseus galaxy cluster.

Spanning some 200,000 light-years, the wave is about twice the size of our own Milky Way galaxy.

The researchers say the wave formed billions of years ago, after a small galaxy cluster grazed Perseus and caused its vast supply of gas to slosh around an enormous volume of space.
_________________