Discovered in 2017, the planet is a gas giant about 1.8 times bigger than Jupiter, with 2.9 times its mass.

It orbits its host star, KELT-9, once every 36 hours on an orbit that carries it almost directly above both of the star’s poles.

At around 9,900 degrees Celsius (17,850 degrees Fahrenheit), the host star is at the dividing line between stars of type A and B.

Also known as HD 195689, the star is about 650 light-years away in the constellation of Cygnus.

It’s about twice the size of our Sun and averages about 56% hotter. But it spins 38 times faster than the Sun, completing a full rotation in just 16 hours. 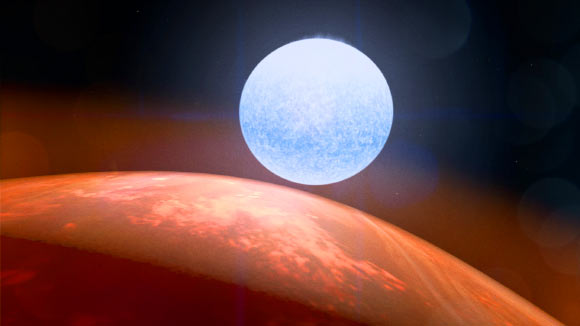 This illustration shows how the ultrahot Jupiter KELT-9b sees its host star.

Measurements from NASAs Transiting Exoplanet Survey Satellite (TESS) have enabled astronomers to greatly improve their understanding of the bizarre environment of KELT-9 b, one of the hottest planets known.
_________________

» New Ultrahot Jupiter Contains Iron in Its Atmosphere
» If the Sun went out for 24 hours..
» TESS Discovers First Known Ultrahot Neptune
» Water Is Destroyed, Then Reborn in Ultrahot Jupiters
» Intricate Clouds of Jupiter
Current date/time is Wed May 18, 2022 5:52 pm