A small satellite galaxy, named Heracles, collided with our Milky Way Galaxy about 10 billion years ago and its remnants account for about one third of the Milky Way’s spherical halo, according to an analysis of data gathered by Sloan Digital Sky Surveys’ Apache Point Observatory Galactic Evolution Experiment (APOGEE).

“To find a fossil galaxy like this one, we had to look at the detailed chemical makeup and motions of tens of thousands of stars,” said Dr. Ricardo Schiavon, an astronomer at Liverpool John Moores University.

“That is especially hard to do for stars in the center of the Milky Way, because they are hidden from view by clouds of interstellar dust.”

“APOGEE lets us pierce through that dust and see deeper into the heart of the Milky Way than ever before.”

“APOGEE does this by taking spectra of stars in near-infrared light, instead of visible light, which gets obscured by dust.” 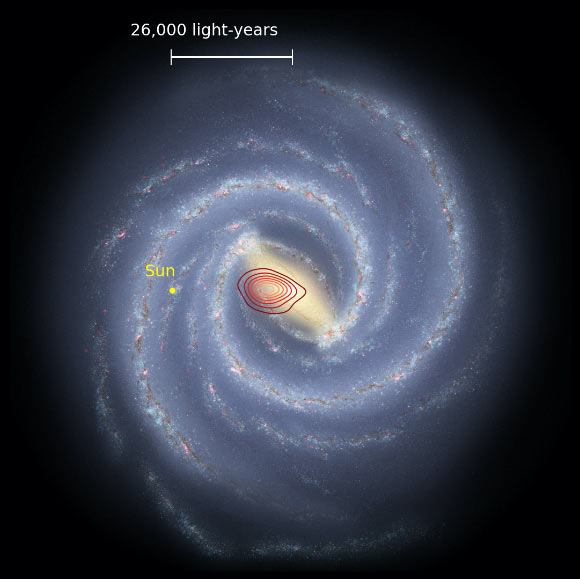 The colored rings show the rough extent of the Heracles galaxy. The yellow dot shows the position of the Sun.

The active galaxy Hercules A was given that name because it is the brightest radio source in the constellation of Hercules. Astronomers found that the double-peaked radio emission corresponded to a giant elliptical galaxy cataloged as 3C 348.

Unusually, this behemoth galaxy is not found within a large cluster of hundreds of galaxies, but rather within a comparatively small group of dozens of galaxies.

The 'active' part of the galaxy is the supermassive black hole in its core, which spews out strong jets of energetic particles that produce enormous lobes of radio emission.

Some astronomers suspect that Hercules A may be the result of two galaxies merging together.
_________________