Scientists get the lowdown on sun's super-hot atmosphere

Scientists get the lowdown on sun's super-hot atmosphere

A phenomenon first detected in the solar wind may help solve a long-standing mystery about the sun: why the solar atmosphere is millions of degrees hotter than the surface.

Images from the Earth-orbiting Interface Region Imaging Spectrograph, aka IRIS, and the Atmospheric Imaging Assembly, aka AIA, show evidence that low-lying magnetic loops are heated to millions of degrees Kelvin.

Researchers at Rice University, the University of Colorado Boulder and NASA's Marshall Space Flight Center make the case that heavier ions, such as silicon, are preferentially heated in both the solar wind and in the transition region between the sun's chromosphere and corona.

There, loops of magnetized plasma arc continuously, not unlike their cousins in the corona above. They're much smaller and hard to analyze, but have long been thought to harbor the magnetically driven mechanism that releases bursts of energy in the form of nanoflares. 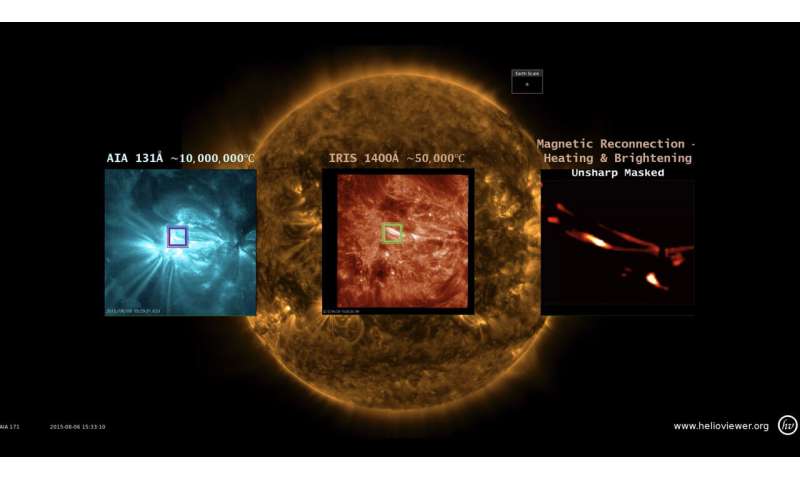 Images of the sun captured by the IRIS mission show new details of how low-lying loops of plasma are energized and may also reveal how the hot corona is created.

The close-up views by EUI show the upper atmosphere of the Sun, or corona, with a temperature of around 1 million degrees. With the power to see features in the solar corona of only 400 km across, these images reveal a multitude of small flaring loops, erupting bright spots and dark, moving fibrils.

A ubiquitous feature of the solar surface, uncovered for the first time by these images, have been called ‘campfires’. They are omnipresent minuature eruptions that could be contributing to the high temperatures of the solar corona and the origin of the solar wind.
_________________

» Scientists spot super-Earth planet in Earth-like orbit
» Beaming with the light of millions of suns
» Hubble weighs in on mass of three million billion suns
» Jupiter’s Dynamic Atmosphere
» Cyclopropenylidene Detected in Atmosphere of Titan
Current date/time is Fri May 20, 2022 2:33 am