Using the MUSE and FORS2 instruments on ESO’s Very Large Telescope (VLT), astronomers have spotted a group of six galaxies around SDSS J1030+0524, a quasar powered by a one billion solar mass black hole.

The light from this large web-like structure has traveled to us from a time when the Universe was only 900 million years old.

The Universe’s very first black holes, thought to have formed from the collapse of the first stars, must have grown very fast to reach masses of a billion suns within the first 0.9 billion years of the Universe’s life.

But astronomers have struggled to explain how sufficiently large amounts of ‘black hole fuel’ could have been available to enable these objects to grow to such enormous sizes in such a short time.

The newfound web-like structure around SDSS J1030+0524 offers a likely explanation: the web and the galaxies within it contain enough gas to provide the fuel that the central black hole needs to quickly become a supermassive giant. 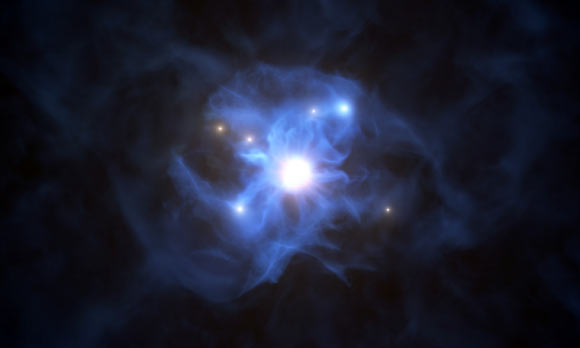 This artist’s impression shows a supermassive black hole in the center of SDSS J1030+0524 and six galaxies — four Lyman-break galaxies and two Lyman-alpha emitting galaxies — trapped in its gas web.

The large web-like structure extends over 300 times the size of the Milky Way.

With the help ofESO’s Very Large Telescope (VLT), astronomers have found six galaxies lying around a supermassive black hole, the first time such a close grouping has been seen within the first billion years of the Universe.

This artist’s impression shows the central black hole and the galaxies trapped in its gas web.