Largest Aggregation of Fishes Ever Observed at Abyssal Depths

Largest Aggregation of Fishes Ever Observed at Abyssal Depths

Marine biologists from the United States and the United Kingdom have recorded over 100 deep water-dwelling cutthroat eels, identified as Ilyophis arx, at a 1 kg bait package deployed on an abyssal seamount summit in the southwestern Clarion-Clipperton Zone in the central Pacific Ocean.

This is the highest number of fishes per kg of bait ever recorded below 1,000 m (3,281 feet), including observations from large organic falls such as cetacean and shark carcasses.

It is also the highest number that has ever been recorded at carrion of any kind or size at abyssal depths.

Abyssal seamounts are deep underwater mountains whose summits are 3,000 m (9,800 feet) below the sea surface.

They dot the deep seascape and are some of the least explored habitats on Earth. 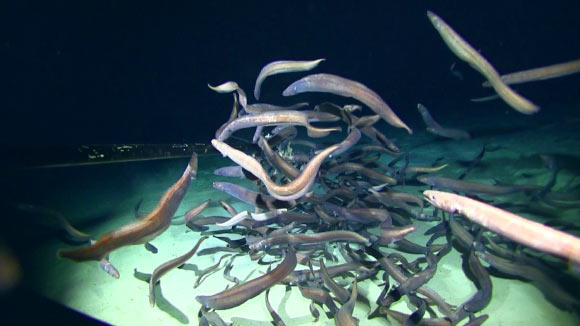 lyophis arx eels swarm around a small bait package deployed on the summit of an unnamed abyssal seamount in the southwestern Clarion-Clipperton Zone in the central Pacific Ocean.

Vailulu'u is an underwater volcano that lies approximately 20 miles east of Ta'u Island in American Samoa. During a 2005 expedition to the volcano, scientists encountered crevices at 708 meters (2,323 feet) of a hydrothermal vent site occupied by thriving aggregations of cutthroat (synaphobranchid) eels.

As the only common metazoan (multicellular) animals occupying these low-temperature hydrothermal vents, preliminary work indicates that these eels use the vent only as a place to live. They seem to feed not on chemosynthetic bacteria, but on crustaceans that pass by Nafanua's summit in the currents.
_________________