75% of sea creatures glow in the dark

Have you ever seen glowing ocean water, like the bright blue surf pictured in the intro slide? The neon water is brimming with dinoflagellates, single-celled plankton with tails that slosh around together in vast numbers.

These creatures have been highlighting Earth's coastlines for 1.2 billion years, and for the past few millennia, they've puzzled humans, who used to attribute the glow of some ocean water to magic or the gods.

Dinoflagellates still puzzle us; we know how they glow, but not why. They might have evolved bioluminescence as a way of frightening predators, or to reveal those predators' locations by flashing when touched. Alternatively, their bioluminescence may just be a fancy way of ridding themselves of oxygen radicals (because the chemical reaction requires oxygen). 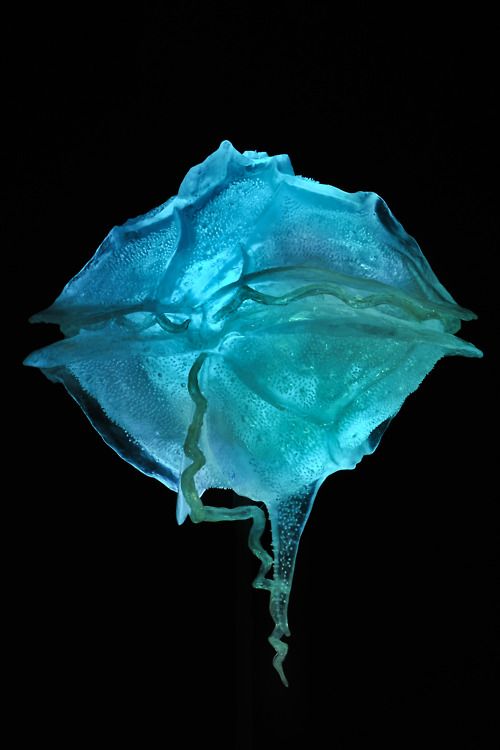 And though small, they possess the amazing power of bioluminescence — meaning, they can glow. In their case, it is whenever they are disturbed (by predators or currents) that they flare.

When their numbers are high enough, they can make ocean waves come alight.

As night falls on certain beaches around the world, the waves glow with an eerie blue light, neon dots that make it look as though stars are washing up on shore.

Some of the most spectacular photographs have been captured from one location, Vaadhoo Island, Maldives, which has been nick named the sea of stars.

Malacosteus has an elongated body with short, blunt snouts and large eyes that face forward, granting binocular vision. Unlike other stomiids, it has a single round nostril on each side in front of the eye. Relative to its size, Malacosteus has one of the widest gapes of any fish, with a lower jaw measuring one-quarter of the fish's length.

The lower jaw has no ethmoid membrane (floor) and is attached only by the hinge and a modified tongue bone. There are several large, fang-like teeth in the front of the jaws, followed by many small barbed teeth. There are several groups of pharyngeal teeth that serve to direct food down the esophagus.

These red and green photophores are evocative of traffic lights, hence the fish's common name. The third is tiny and round, located between the eye and the large red photophore. Several rows and clusters of blue photophores are present on the sides and belly.

In addition, there are small photophores and accessory areas of white luminous tissue scattered over the head and body. The skin is thin and scaleless; the coloration is black

"A The head and lower jaw of a fresh specimen of Malacosteus. The edge of the reflector shows the position of the dark brown suborbital photophore (s-o) and whitish postorbital/accessory (p-o).

B Similar image in longwave ultraviolet light showing the intense red fluorescence of the suborbital photophore.

C-E Three ISIT video frames from a series of flashes from a single specimen, showing C the flashing of the SO alone, D the PO alone and E both PO and SO.

The three frames are sequential, with an interval of 4 s between C and D and 2.6 s between D and E. The postorbital actually flashed 1 s after the suborbital but its intensity at that point caused the ISIT image to bloom." Scale bars: 5 mm

A genus of Dragonfish can be found throughout the world's oceans: known for possessing red and green bioluminescence akin to a traffic light, the Stoplight Loosejaw, AKA Rat Trap Fish, is a bizarre inhabitant of the deep.
_________________