In 2004, astronomers using NASA’s Galaxy Evolution Explorer discovered an unusual, ring-shaped ‘blue’ nebula and the star at its center, TYC 2597-735-1. New observations of the object suggest that TYC 2597-735-1 merged with its lower-mass stellar companion less than 5,000 years ago and created a bipolar outflow of material.

“We were in the middle of observing one night, with a new spectrograph that we had recently built, when we received a message from our colleagues about a peculiar object composed of a nebulous gas expanding rapidly away from a central star,” said co-author Dr. Guðmundur Stefánsson, a postdoctoral researcher in the Department of Astrophysical Sciences at Princeton University.

“How did it form? What are the properties of the central star? We were immediately excited to help solve the mystery!” 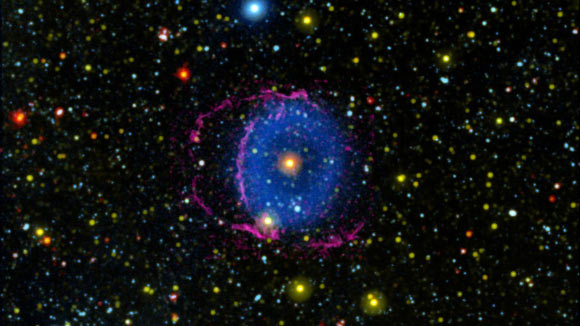 The Blue Ring Nebula is located 6,197 light-years away in the constellation of Hercules. The nebula is 13 light years wide and is composed of hydrogen gas (blue) expanding from a central star, which is the remnant core of a stellar merger; red filaments are shockwave filaments from the merging event.

The Blue Ring Nebula is thought to be the product of two stars merging into one.

The collision of the bodies ejected a cloud of hot debris into space.

A disk of gas orbiting the larger star cut the cloud in half, creating two cones that are moving away from the star in opposite directions.
_________________