VLASS is a project that will survey the sky visible from NSF’s Karl G. Jansky Very Large Array (VLA) — about 80% of the entire sky — three times over seven years. The observations began in 2017 and the first of the three scans now is complete.

Dr. Kristina Nyland, a postdoctoral researcher at the Naval Research Laboratory, and colleagues compared data from this scan with data from the FIRST survey that used the VLA to observe a smaller portion of the sky between 1993 and 2011.

“We found galaxies that showed no evidence of jets before but now show clear indications of having young, compact jets,” Dr. Nyland said.

“Jets like these can strongly affect the growth and evolution of their galaxies, but we still don’t understand all of the details.”

“Catching newborn jets with surveys like VLASS provides a measure of the role of powerful radio jets in shaping the lives of the galaxies over billions of years.” 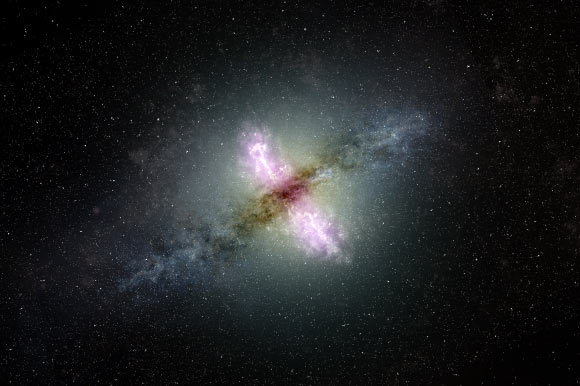 An artist’s conception of a galaxy with an active nucleus propelling jets of material outward from the galaxy’s center. 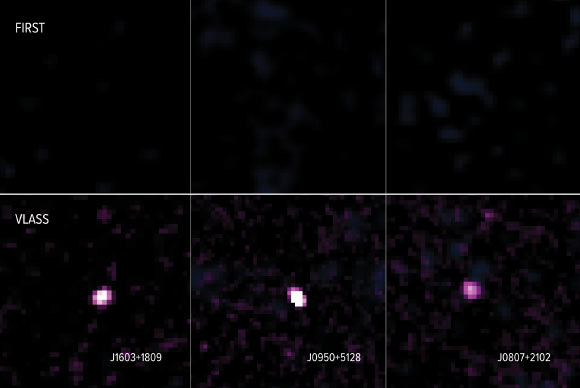 VLA images of three galaxies in the study, comparing what was seen in the earlier FIRST survey and the later VLASS; the newly-appearing bright radio emission indicates that the galaxies launched new jets of material sometime between the dates of the two observations.

Some supermassive black holes launch powerful beams of material, or jets, away from them, while others do not. Astronomers may now have identified why.