A galactic bar is the approximately linear structure of stars and gas that stretches across the inner regions of some galaxies. The bar stretches from one inner spiral arm, across the nuclear region, to an arm on the other side.

Found in about half of spiral galaxies, including the Milky Way, bars are thought to funnel large amounts of gas into the nuclear regions, with profound consequences for the region including bursts of star formation and the rapid growth of the supermassive black hole at the center.

The luminous, barred galaxy ESO 320-G030 is about one hundred and fifty million light-years away and shows no signs of having been in a merger, yet this galaxy has a bar nearly sixty thousand light-years long, as well as a second bar about ten times smaller perpendicular to it.

This galaxy shows high star formation activity in the nuclear region, but no clear evidence of an active nucleus, perhaps because of the high extinction. The galaxy is also seen with inflowing gas (and evidence of outflows simultaneously), making it a nearby prototype of isolated, rapidly evolving galaxies driven by their bars. 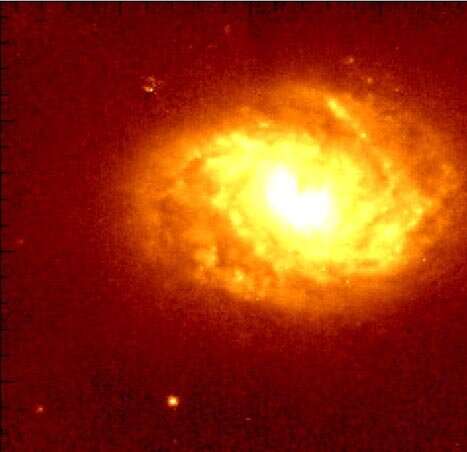 Infrared observations and modeling of over a dozen molecular species at its center reveal massive inflows of gas to a nuclear region undergoing a burst of star formation and dominated by three-components, a small warm core, a disk, and an outer envelope.

Hubble has delivered an unrivalled snapshot of the nearby barred spiral galaxy NGC 1672.

This remarkable image provides a high-definition view of the galaxy's large bar, its fields of star-forming clouds and its dark bands of interstellar dust.
_________________