Nicknamed Elegast, the object is located 212 light-years away in the constellation of Hercules.

“Radio waves emitted by brown dwarfs carry information about their magnetic field strength,” said lead author Dr. Harish Vedantham, an astronomer in ASTRON and the Kapteyn Astronomical Institute at the University of Groningen, and colleagues.

“LOFAR’s low frequency of observation makes it sensitive to magnetic fields comparable to that of a fridge magnet, which is within the range postulated to exist on the coldest brown dwarfs and large exoplanets.” 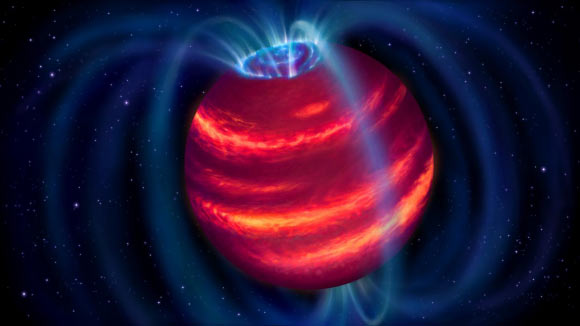 A collaboration between the LOw Frequency ARray (LOFAR) radio telescope in Europe, the Gemini North telescope, and the NASA InfraRed Telescope Facility (IRTF), both on Maunakea in Hawai‘i, has led to the first direct discovery of a cold brown dwarf from its radio wavelength emission.

Along with paving the way for future brown dwarf discoveries, this result is an important step towards applying radio astronomy to the exciting field of exoplanets.
_________________