Jupiter’s icy moon Europa is bombarded by a constant and intense blast of radiation from the gas giant. Different salty compounds on the moon’s surface react differently to the radiation and emit their own unique glimmer.

“How that composition varies could give us clues about whether Europa harbors conditions suitable for life.”

“That’s because Europa holds a massive, global interior ocean that could percolate to the surface through the moon’s thick crust of ice. By analyzing the surface, we can learn more about what lies beneath.”

The surface of Europa is likely made of a mix of ice and commonly known salts on Earth, such as magnesium sulfate and sodium chloride.

The new research shows that incorporating those salts into water ice under Europa-like conditions and blasting it with radiation produces a glow. 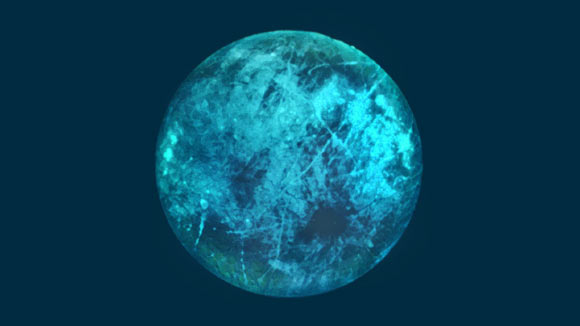 This illustration of Jupiter’s moon Europa shows how its icy surface may glow on its nightside.

» Europa’s Plumes May Originate from Near-Surface Brine Reservoirs
» Dark matter clusters could reveal nature of dark energy
» Jupiter and Its Icy Moon Europa
» Europa’s Ocean Ascending
» Europa Has Volcanoes on the Floor of Its Subsurface Ocean
Current date/time is Tue May 17, 2022 6:10 am