SDSS J0901+1814, a giant galaxy cluster located 3.9 billion light-years away in the constellation of Cancer, is so massive that its gravity distorts and magnifies light from a more distant starburst galaxy.

Galaxy clusters contain thousands of galaxies of all ages, shapes and sizes. Typically, they have a mass of about one million billion times the mass of the Sun and form over billions of years as smaller groups of galaxies slowly come together.

Albert Einstein predicted in his theory of general relativity that massive objects will deform the fabric of space itself.

When light passes one of these objects, such as a huge galaxy cluster, its path is changed slightly.

Called gravitational lensing, this effect is only visible in rare cases and only world’s best telescopes can observe the related phenomena. 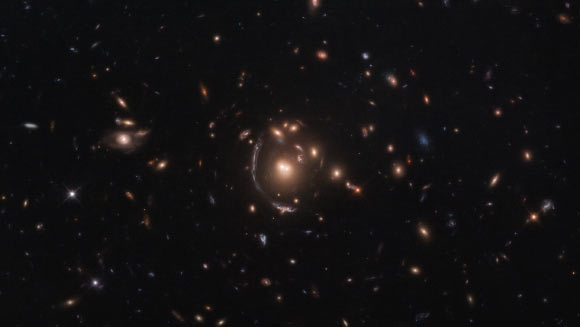 This Hubble image shows the strong-lensing galaxy cluster SDSS J0901+1814. The lensed star-forming galaxy LRG-3-817 is seen as a long arc to the left of the cluster’s central galaxy. The color image was made from separate exposures taken in the visible and infrared regions of the spectrum with Hubble’s Wide Field Camera 3 (WFC3). Five filters were used to sample various wavelengths. The color results from assigning different hues to each monochromatic image associated with an individual filter.

Objects with large masses such as galaxies or clusters of galaxies warp the spacetime surrounding them in such a way that they can create multiple images of background objects.