Also known as NGC 246 or Caldwell 56, the Skull Nebula is located 1,671 light-years away in the southern constellation of Cetus.

Discovered on November 27, 1785 by the German-born British astronomer, the nebula is approximately 6 light-years across.

The Skull Nebula formed when a Sun-like star expelled its outer layers in its old age, leaving behind its naked core — a white dwarf named HIP 3678 — one of two stars that can be seen at the very center of the nebula.

Even though the Skull Nebula has been known for centuries, only in 2014 did astronomers discover that HIP 3678 and its companion are concealing a third star situated at the heart of the nebula. 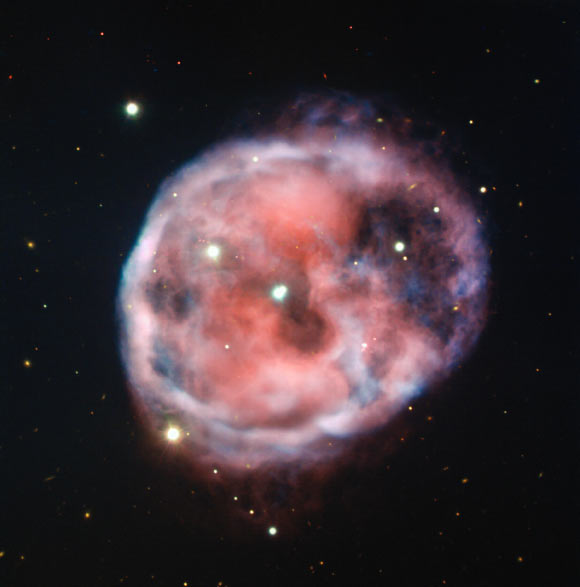 This image, taken by the FORS 2 instrument on ESO’s Very Large Telescope shows the Skull Nebula, a planetary nebula 1,671 light-years away in the constellation of Cetus.

Zooming in on the Skull Nebula

» Emission Nebula in Monoceros
» Tarantula Nebula: A crowded neighborhood
» Hubble revisits the Veil Nebula
» Stars vs. dust in the Carina Nebula
» Planetary nebula lasers
Current date/time is Tue May 17, 2022 4:56 am