The fur of the platypus (Ornithorhynchus anatinus), one of only five extant species of monotremes (egg-laying mammals), absorbs ultraviolet light at wavelengths of 200-400 nm and re-emits visible light, making it fluoresce, according to new research from Northland College and the Warner College of Natural Resources at Colorado State University. This is the first observation of biofluorescence in a monotreme.

Biofluorescence, in which short wavelengths of light are absorbed and longer wavelengths are re-emitted by living organisms, has been observed in a wide range of fishes, reptiles and amphibians and birds.

Within mammals, marsupial opossums and placental flying squirrels are known to have fur that biofluoresces under UV light.

“It’s thought that monotremes branched off the marsupial-placental lineage more than 150 million years ago. So, it was intriguing to see that animals that were such distant relatives also had biofluorescent fur.” 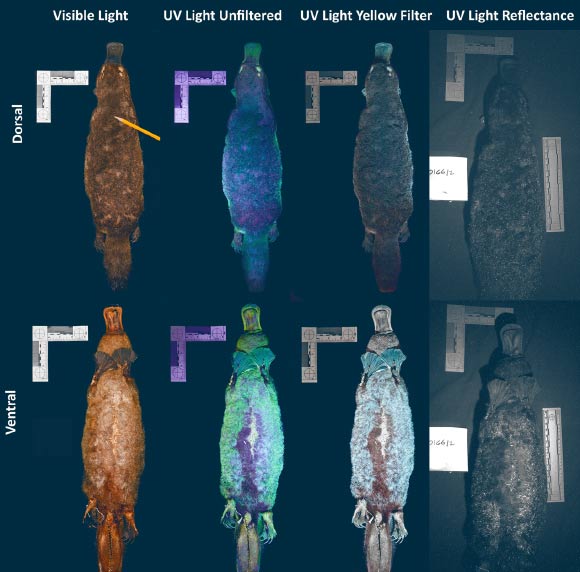 Cyan to green biofluorescence of 500 nm is seen in the middle panels.

UV absorption is indicated by dark areas in the far right panel.

“Biofluorescence in mammals is not restricted to a few closely related specialists; instead, it appears across the phylogeny, which begs the question: Is biofluorescence an ancestral mammalian trait?”

Fluorescent frog discovered in Argentina, but can only be seen under ultraviolet light.

According to Tech Times, the frog, formerly known as Hypsiboas punctatus, was found in the jungles near Santa Fe. The discovery came as a surprise as the frog’s fluorescent glow is only visible to humans when it is under ultraviolet light.

Like other biofluorescent organisms, the frogs can absorb light at short wavelengths and and re-emit the light at longer wavelengths, creating the fluorescence.

Researchers suspect the frogs use their fluorescence to improve visual perception as it can make them 30 percent brighter during twilight and 19 percent brighter on a night with a full moon, New Scientist reports.

Fluorescence is more commonly found in marine creatures such as coral. Other land animals that are known to have fluorescence capabilities include parrots and some species of scorpions.
_________________