Jupiter’s satellite Io is unique amongst planetary bodies in the Solar System.

It hosts more than 400 active volcanoes, spewing out sulfur gases. Its yellow-white-orange-red coloration is produced by sulfur dioxide-frost on its surface, elemental sulfur and a variety of sulfur allotropes.

Io has a thick atmosphere that can teach us about the moon’s volcanic activity and provide us a window into the exotic moon’s interior and what is happening below its colorful crust. 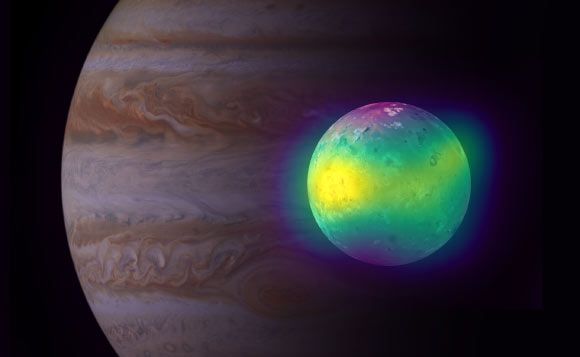 Composite image showing Io in radio (ALMA) and optical light (Voyager 1 and Galileo); the ALMA images show plumes of sulfur dioxide (in yellow); Jupiter is visible in the background (Hubble).

This video shows images of Jupiter's moon Io in radio (made with ALMA), and optical light (made with Voyager 1 and Galileo missions).