Astronomers using twin 8.1-m telescopes at Gemini Observatory in Chile have captured the most detailed near-infrared image yet of the Carina Nebula’s western wall, the well-defined edge of the nebula.

The Carina Nebula, also known as NGC 3372 and Caldwell 92, is located an estimated 7,500 light-years away in the constellation of Carina.

Discovered in the 1750s by French astronomer Nicolas Louis de Lacaille, the nebula is a dynamic, evolving cloud of thinly spread interstellar gas and dust.

The massive stars in its interior emit intense radiation that causes the surrounding gas to glow. By contrast, other regions contain dark pillars of dust cloaking newborn stars.

Spanning over 300 light-years, the nebula is one of the Milky Way Galaxy’s largest star-forming regions and is easily visible to the unaided eye under dark skies. 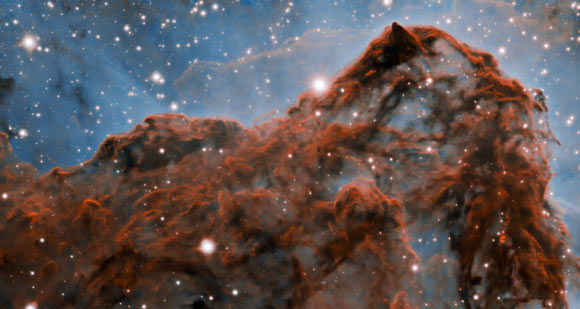 A 5-light-year-long section of the western wall in the Carina Nebula, as observed with adaptive optics on the Gemini South telescope.

This mountainous section of the nebula reveals a number of unusual structures including a long series of parallel ridges that could be produced by a magnetic field, a remarkable almost perfectly smooth wave, and fragments that appear to be in the process of being sheared off the cloud by a strong wind.

There is also evidence for a jet of material ejected from a newly-formed star. The exquisite detail seen in the image is in part due to a technology known as adaptive optics, which resulted in a ten-fold improvement in the resolution of the research team’s observations.

Stars and Dust in the Carina Nebula

The VISTA telescope has allowed us to peer through the hot gas and dark dust shrouding the spectacular Carina nebula to show us myriad stars, both newborn and in their death throes.
_________________