The 2017 observations from the Event Horizon Telescope (EHT) of M87*, a 6.5-billion-solar-mass black hole in the center of the giant elliptical galaxy Messier 87, have led to the first measurement of the size of a black-hole shadow.

Based on an analysis of M87*’s shadow, the EHT researchers have now conducted a unique test of general relativity, deepening understanding about the unusual properties of black holes and ruling out many alternatives.

Despite its success, Albert Einstein’s theory remains mathematically irreconcilable with quantum mechanics, the scientific understanding of the subatomic world.

Testing general relativity is important because the ultimate theory of the Universe must encompass both gravity and quantum mechanics. 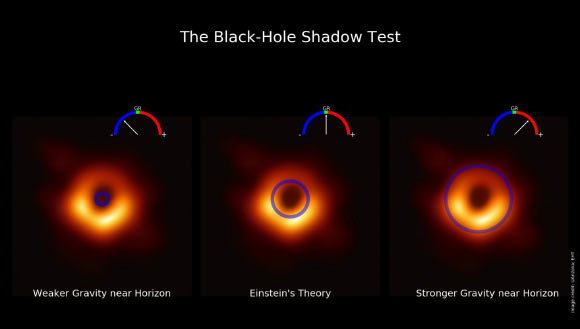 Visualization of the new gauge developed to test the predictions of modified gravity theories against the measurement of the size of M87*’s shadow.

Gravitational tests have been conducted in a variety of cosmic settings. During the 1919 solar eclipse, the first evidence of general relativity was seen based on the displacement of starlight, traveling along the curvature of spacetime caused by the Sun’s gravity.
_________________

The Event Horizon Telescope (EHT) — a planet-scale array of eight ground-based radio telescopes forged through international collaboration — was designed to capture images of a black hole. In coordinated press conferences across the globe, EHT researchers revealed that they succeeded, unveiling the first direct visual evidence of a supermassive black hole and its shadow.

This zoom video starts with a view of ALMA and zooms in on the heart of M87, showing successively more detailed observations and culminating in the first direct visual evidence of a supermassive black hole’s shadow.
_________________