LTT 9779 is a G8-type star located 260 light-years away in the constellation of Sculptor.

Named LTT 9779b, the newfound planet orbits so close to its star that its year lasts only 19 hours, and stellar radiation heats the planet to 1,727 degrees Celsius (3,141 degrees Fahrenheit). At these temperatures, heavy elements like iron can be ionized in the atmosphere and molecules disassociated.

The alien world is 4.6 times larger than Earth and 29 times as massive. Its mean density is similar to that of Neptune and its atmosphere makes up around 9% of the total planetary mass. 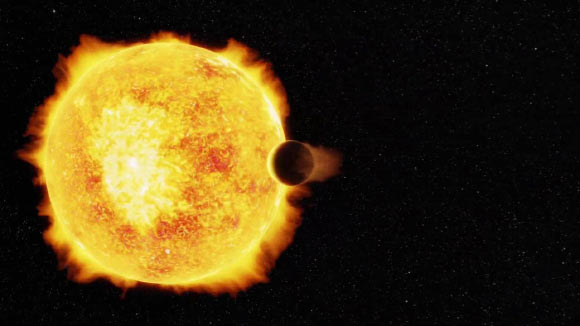 An artist’s impression of the ultrahot Neptune LTT 9779b and its parent star, LTT 9779.

Measurements from NASAs Transiting Exoplanet Survey Satellite (TESS) have enabled astronomers to greatly improve their understanding of the bizarre environment of KELT-9 b, one of the hottest planets known.
_________________