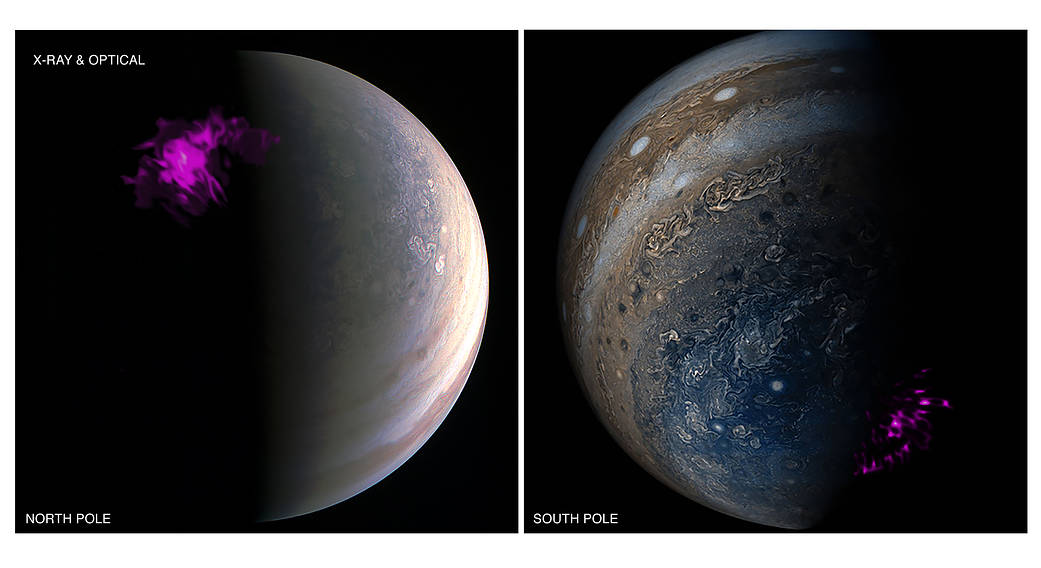 Jupiter's intense northern and southern lights, or auroras, behave independently of each other according to a new study using NASA's Chandra X-ray and ESA's XMM-Newton observatories.

Using XMM-Newton and Chandra X-ray observations from March 2007 and May and June 2016, a team of researchers produced maps of Jupiter's X-ray emissions (shown in inset) and identified an X-ray hot spot at each pole. Each hot spot can cover an area equal to about half the surface of the Earth.

The team found that the hot spots had very different characteristics. The X-ray emission at Jupiter's south pole consistently pulsed every 11 minutes, but the X-rays seen from the north pole were erratic, increasing and decreasing in brightness — seemingly independent of the emission from the south pole.

This makes Jupiter particularly puzzling. X-ray auroras have never been detected from our Solar System's other gas giants, including Saturn. Jupiter is also unlike Earth, where the auroras on our planet's north and south poles generally mirror each other because the magnetic fields are similar.

For some time, scientists have observed high-energy auroras on Jupiter in the form of ultraviolet and X-ray light. A new study using data from NASA's Chandra X-ray Observatory and ESA's XMM-Newton shows that the auroras on Jupiter are significantly different than those on Earth. Scientists have discovered that Jupiter's auroras behave independently of one another at each pole. This is unlike Earth, where the northern and southern lights tend to mirror one another.

To understand how Jupiter produces its X-ray auroras, researchers plan to combine new and upcoming X-ray data from Chandra and XMM-Newton with information from NASA's Juno mission, which is currently in orbit around the planet. If scientists can connect the X-ray activity with physical changes observed simultaneously with Juno, they may be able to determine the process that generates the Jovian auroras.