In this study, published in the Journal of Geophysical Research, scientists compared ground-based videos of pulsating auroras—a certain type of aurora that appears as patches of brightness regularly flickering on and off—with satellite measurements of the numbers and energies of electrons raining down towards the surface from inside Earth’s magnetic bubble, the magnetosphere. The team found something unexpected: A drop in the number of low-energy electrons, long thought to have little or no effect, corresponds with especially fast changes in the shape and structure of pulsating auroras.

“Without the combination of ground and satellite measurements, we would not have been able to confirm that these events are connected,” said Marilia Samara, a space physicist at NASA’s Goddard Space Flight Center in Greenbelt, Maryland, and lead author on the study.

Pulsating auroras are so-called because their features shift and brighten in distinct patches, rather than elongated arcs across the sky like active auroras. However, their appearance isn’t the only difference. Though all auroras are caused by energetic particles—typically electrons—speeding down into Earth’s atmosphere and colliding brilliantly with the atoms and molecules in the air, the source of these electrons is different for pulsating auroras and active auroras.

This all-sky movie shows a time lapse of a pulsating aurora on Jan. 3, 2012. Scientists compared the video, taken in Poker Flat, Alaska, over the course of three minutes, with satellite measurements of the numbers and energies of electrons raining down from the magnetosphere to better understand how electrons transfer energy to the upper atmosphere and create the auroras. The black mark traces the satellite foot point—the place where the satellite is magnetically connected to the aurora—of the Defense Meteorological Satellite Program satellite. 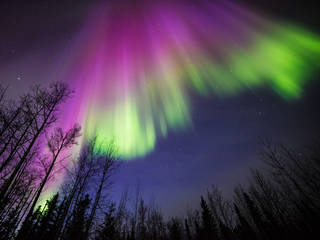 This image of a colorful aurora was taken in Delta Junction, Alaska, on April 10, 2015. All auroras are created by energetic electrons, which rain down from Earth’s magnetic bubble and interact with particles in the upper atmosphere to create glowing lights that stretch across the sky.