Astronomers using the twin LIGO detectors located in Livingston, Louisiana, and Hanford, Washington, and the Virgo detector located near Pisa, Italy, have detected gravitational waves from the most massive binary black hole merger ever discovered.

The two spinning black holes merged when the Universe was only about 7 billion years old, which is roughly half its present age, and formed a larger black hole weighing a whopping 142 times the mass of the Sun — a so-called intermediate-mass black hole. 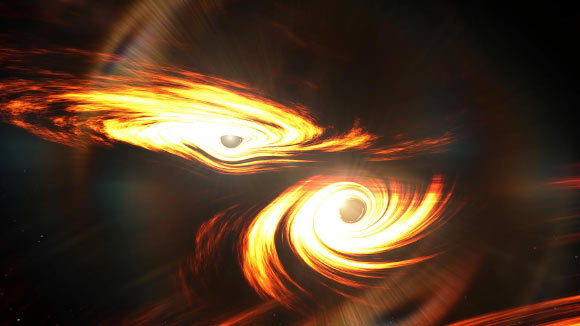 An artist’s impression of binary black holes about to collide.

Two Black Holes Merge into One

The two merging black holes are each roughly 30 times the mass of the sun, with one slightly larger than the other. Time has been slowed down by a factor of about 100. The event took place 1.3 billion years ago.