High-resolution observations with the Atacama Large Millimeter/submillimeter Array (ALMA) imaged a rotating dusty gas torus around an active supermassive black hole. The existence of such rotating donuts-shape structures was first suggested decades ago, but this is the first time one has been confirmed so clearly. This is an important step in understanding the co-evolution of supermassive black holes and their host galaxies.

Almost all galaxies hold concealed monstrous black holes in their centers. Researchers have known for a long time that the more massive the galaxy is, the more massive the central black hole is. This sounds reasonable at first, but host galaxies are 10 billion times bigger than the central black holes; it should be difficult for two objects of such vastly different scales to directly affect each other. So how could such a relation develop? 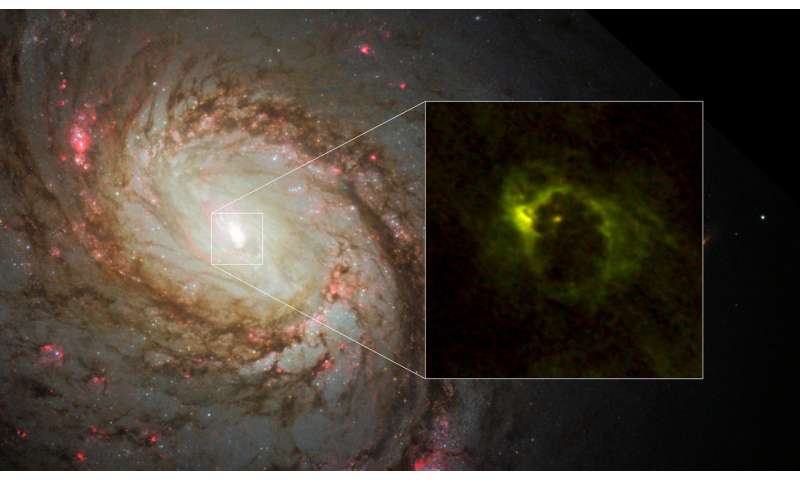 The central region of the spiral galaxy M77. The NASA/ESA Hubble Space Telescope imaged the distribution of stars. ALMA revealed the distribution of gas in the very center of the galaxy. ALMA imaged a horseshoe-like structure with a radius of 700 light-years and a central compact component with a radius of 20 light-years. The latter is the gaseous torus around the AGN. Red indicates emission from formyl ions (HCO+) and green indicates hydrogen cyanide emission.

This picturesque spiral galaxy appears to be tranquil, but there is more to it than meets the eye. Messier 77 (also known as NGC 1068) is one of the closest active galaxies, which are some of the most energetic and spectacular objects in the Universe. Their nuclei are often bright enough to outshine the whole of the rest of the galaxy. Active galaxies are among the brightest objects in the Universe and emit light at most, if not all, wavelengths, from gamma rays and X-rays all the way to microwaves and radiowaves.

Messier 77 is further classified as a Type II Seyfert galaxy, characterized by being particularly bright at infrared wavelengths. This impressive luminosity is caused by intense radiation blasting out from a central engine — the accretion disc surrounding a supermassive black hole.

It's the cosmic event of the year. Right now, telescopes all over the world are turning to our galaxy's centre, where for the first time ever they may have a front-row look at a super massive black hole consuming a gas cloud.

By observing this galactic snack fest, astronomers should be able to figure out what's going on in the black hole's immediate vicinity and potentially even witness some gas disappear into the massive object's maw. What they see may help scientists solve a decades-old puzzle about why our galaxy's central black hole is so quiet.

The gas cloud currently headed for the central black hole could either continue on its current orbit and slingshot around the black hole or it could run into surrounding gas and dust, which will make it lose speed and start sliding down toward the black hole. The first scenario could give scientists insight into the evolution of galaxies and better understand the history of our Milky Way's own black hole. In the second case, they might get to watch the black hole consume a sizable dinner.