Not so long ago, astronomers mapped a galaxy far, far away using radio waves and found it has a strikingly familiar shape. In the process, they discovered the object, called TXS 0128+554, experienced two powerful bouts of activity in the last century.

Around five years ago, NASA's Fermi Gamma-ray Space Telescope reported that TXS 0128+554 (TXS 0128 for short) is a faint source of gamma rays, the highest-energy form of light.

TXS 0128 lies 500 million light-years away in the constellation Cassiopeia, anchored by a supermassive black hole around 1 billion times the Sun's mass. It's classified as an active galaxy, which means all its stars together can't account for the amount of light it emits.

This illustration shows two views of the active galaxy TXS 0128+554, located around 500 million light-years away. Left: The galaxy's central jets appear as they would if we viewed them both at the same angle. The black hole, embedded in a disk of dust and gas, launches a pair of particle jets traveling at nearly the speed of light.

Scientists think gamma rays (magenta) detected by NASA's Fermi Gamma-ray Space Telescope originate from the base of these jets. As the jets collide with material surrounding the galaxy, they form identical lobes seen at radio wavelengths (orange).

The jets experienced two distinct bouts of activity, which created the gap between the lobes and the black hole. Right: The galaxy appears in its actual orientation, with its jets tipped out of our line of sight by about 50 degrees. 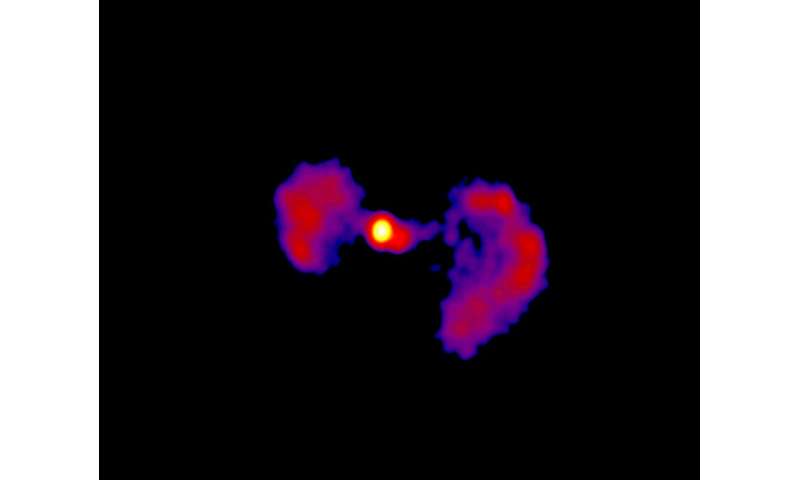 This image shows TXS 0128 at 15.4 gigahertz as observed by the Very Long Baseline Array (VLBA), a globe-spanning network of radio antennas.

The colors correspond to the radio signal's intensity, from low (purple) to high (yellow).


Using NASA’s Fermi Gamma-ray Space Telescope, scientists have found for the first time ever the source of a high-energy neutrino from outside our galaxy.

The blazar TXS 0506+056 was the most active it had been in a decade at the time of the neutrino detection.

Blazar TXS 0506+056 is an active galaxy where a supermassive black hole with millions to billions of times the Sun’s mass that blasts particle jets outward in opposite directions at nearly the speed of light.
_________________