While most Kermode bears are black, there are between 100 and 500 fully white individuals. The white variant is known as Spirit Bear and is most common on three islands in British Columbia (Gribbell, Princess Royal, and Roderick), where they make up 10–20% of the Kermode population.

Spirit Bears hold a prominent place in the oral traditions of the indigenous peoples of the area. 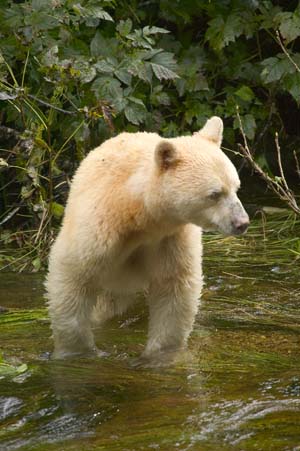 By Maximilian Helm from Dresden, Deutschland

A Kermode bear from the Great Bear Rainforest, British Columbia

In this episode we meet two very different spirit bears: Ma’ah, a twenty-year-old legend of Canada’s Great Bear Rainforest known for her mild-mannered temperament, and Warrior, a younger, more aggressive rival with hopes of one day ruling the creek.
_________________