'Terror crocodile' had teeth the size of bananas

'Terror crocodile' had teeth the size of bananas

A new study has revealed the immense power of one of the largest crocodilians ever to walk the Earth.
Imagine a gigantic crocodile the length of a bus, with two rows of teeth the size of bananas - a predatory reptile so powerful that it could catch and devour large dinosaurs...

Enter Deinosuchus the 'terror crocodile', a long-extinct genus of crocodilian that roamed the Earth between 75 and 82 million years ago. It was so large, that even the largest predatory dinosaurs of the time may have found themselves serving as a potential meal.

Now a new fossil study has cast new light on the threat posed by this gargantuan carnivore.

"Deinosuchus was a giant that must have terrorized dinosaurs that came to the water's edge to drink," said study leader Dr. Adam Cossette from Arkansas State University.

"Until now, the complete animal was unknown. These new specimens we've examined reveal a bizarre, monstrous predator with teeth the size of bananas." 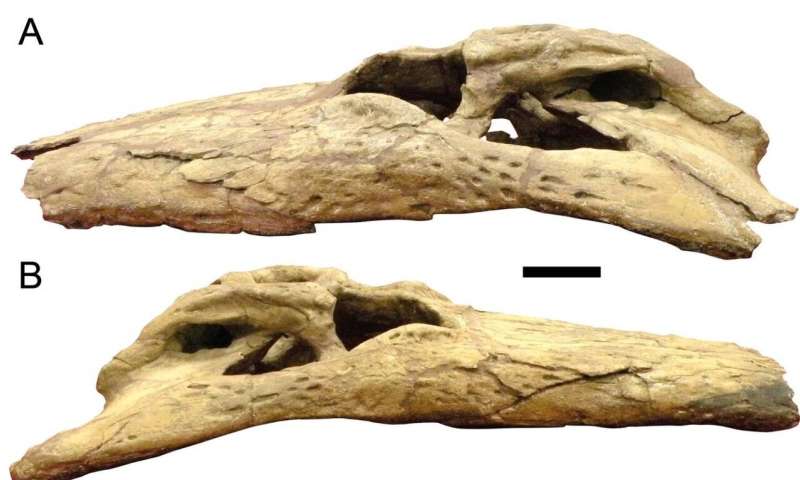 Most telling are bite marks found on the fossil bones of dinosaurs that lived alongside it.

"Deinosuchus seems to have been an opportunistic predator, and given that it was so enormous, almost everything in its habitat was on the menu," said co-author Stephanie Drumheller-Horton.

"We actually have multiple examples of bite marks made by D. riograndensis and a species newly described in this study, D. schwimmeri, on turtle shells and dinosaur bones."

Deinosuchus prey were giant herbivorous dinosaurs, it hunted like normal crocs, waiting in the water at unsuspected prey like Nile Crocodiles do in the African continet. pic.twitter.com/5NORJmZEtU

Re: 'Terror crocodile' had teeth the size of bananas

» Perseverance lands on Mars: "7 Minutes Of Terror"
» This Indian Temple Is Home to a ‘Vegetarian’ Crocodile
» Scientists Find Rare Mineral inside Chiton Teeth
» Tiny dinosaur was the size of a coffee cup
» Astronomers confirm size of largest comet ever discovered
Current date/time is Sun Jul 03, 2022 4:34 pm