An international group of astronomers has detected a new "hot Jupiter" exoplanet making a near-grazing transit of its host star. The newly found alien world, designated WASP-174b, is most likely similar in size and mass to Jupiter, however much hotter than our solar system's biggest planet. The discovery is reported February 2 in a paper published on arXiv.org.

A grazing transit means that a planet only partially transits its parent star's disc. Such planets are important for researchers, as they offer a great opportunity to find additional bodies orbiting host stars. This is because other, yet undetected objects would perturb the grazing planet's orbit and could potentially induce periodic variations of the transit impact parameter, leading to transit duration variations. However, although astronomers have identified hundreds of exoplanets, only a handful of grazing extrasolar worlds have been discovered to date. 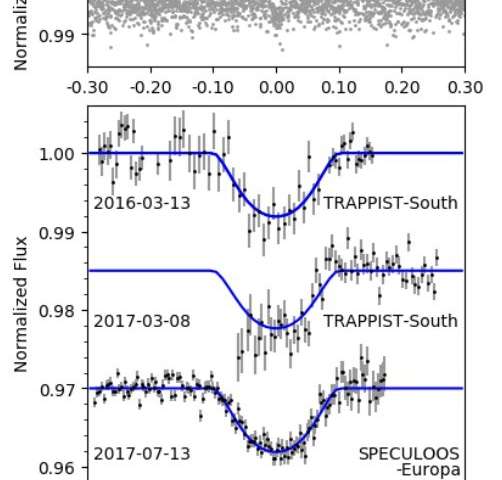 The study found that WASP-174b orbits its star every 4.23 days at a distance of about 0.0555 AU from the host. It is estimated that the planet's equilibrium temperature is 1,470 K.

Hot Jupiters (also called roaster planets, epistellar jovians, pegasids or pegasean planets) are a class of exoplanets that are inferred to be physically similar to Jupiter but that have very short orbital radii with semi-major axes from 0.015 to 0.5 astronomical units (2.2×106 to 74.8×106 km). The close proximity to their stars and high surface temperatures resulted in the moniker "hot Jupiters".

Hot Jupiters are the easiest extrasolar planets to detect via the radial-velocity method, because the oscillations they induce in their parent stars' motion are relatively large and rapid compared to those of other known types of planets. One of the best-known hot Jupiters is 51 Pegasi b. Discovered in 1995, it was the first extrasolar planet found orbiting a Sun-like star. 51 Pegasi b has an orbital period of about 4 days.

This artist’s view shows the hot Jupiter exoplanet 51 Pegasi b, sometimes referred to as Bellerophon, which orbits a star about 50 light-years from Earth in the northern constellation of Pegasus (The Winged Horse). This was the first exoplanet around a normal star to be found in 1995. Twenty years later this object was also the first exoplanet to be be directly detected spectroscopically in visible light.