'Oumuamua flew through our solar system in October and was originally thought to be a comet, then it was later revealed as a cucumber-shaped asteroid.

Since October, Dr. Wes Fraser, alongside Dr. Pedro Lacerda, Dr. Michele Bannister, and Professor Alan Fitzsimmons, all from Queen's University Belfast's School of Mathematics and Physics, have been analysing the brightness measurements of the object. They have been working with an international team, including Dr. Petr Pravec from the Academy of Sciences of the Czech Republic, Dr. Colin Snodgrass from The Open University and Igor Smolic ́from the University of Belgrade.

Straight away, they discovered that 'Oumuamua wasn't spinning periodically like most of the small asteroids and bodies that we see in our solar system. Instead, it is tumbling, or spinning chaotically, and could have been for many billions of years. 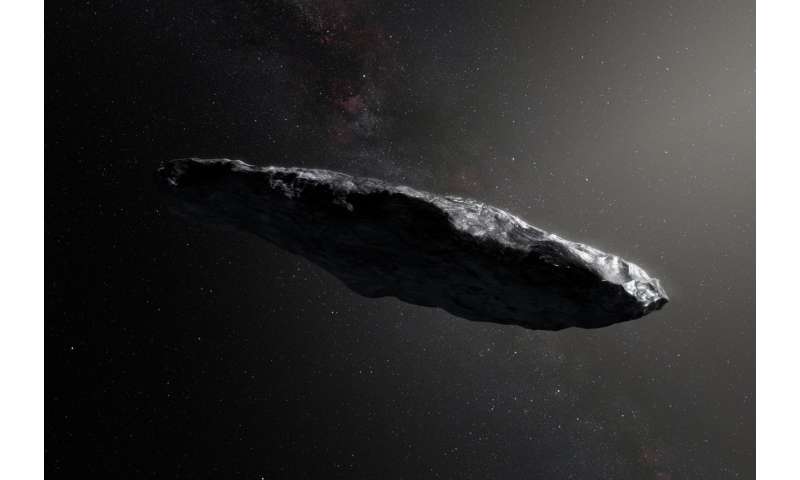 The first discovered interstellar visitor to our solar system has had a violent past, which is causing it to tumble around chaotically, a Queen's University Belfast scientist has discovered.

Scientists were surprised and delighted to detect --for the first time-- an interstellar asteroid passing through our solar system. Additional observations brought more surprises: the object is cigar-shaped with a somewhat reddish hue.

The asteroid, named ‘Oumuamua by its discoverers, is up to one-quarter mile (400 meters) long and highly-elongated—perhaps 10 times as long as it is wide. That is unlike any asteroid or comet observed in our solar system to date, and may provide new clues into how other solar systems formed.

» Chasing 'Oumuamua
» Could 'Oumuamua be an extraterrestrial solar sail?
» Tracking the interstellar object 'Oumuamua to its home
» Harvard professor: 'Oumuamua was alien tech'
» Evidence of aliens? What to make of research and reporting on 'Oumuamua, our visitor from space
Current date/time is Fri May 20, 2022 2:25 am