Saturn's most Earth-like moon looks a bit less likely to host life, thanks to quantum mechanics, the weird rules that govern subatomic particles.

Titan, the second largest moon in our solar system after Jupiter's Ganymede, is unique in two ways that have convinced some researchers that this moon might host extraterrestrial life: It's the only moon in our solar system with a dense atmosphere, and it's the only body in space, besides Earth, known to definitely have pools of liquid on its surface.

In Titan's case, those pools are frigid lakes of hydrocarbons, closer to the gasoline in a car than the oceans on Earth. But some researchers have suggested that complex structures could arise in those pools: bubbles with special properties that mimic ingredients found to be necessary for life on our planet. 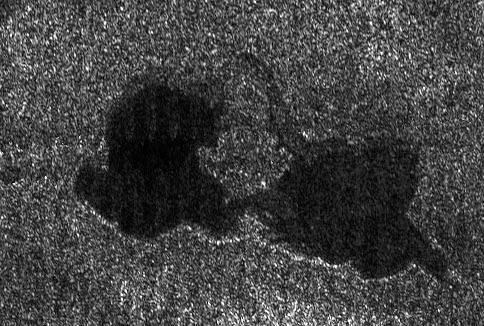 An image from NASA's Cassini probe, taken Sept. 23, 2006, shows a pair of hydrocarbon lakes on Titan.

Soar over Saturn's moon Titan to get a bird's-eye view of the moon's vast lakes of liquid hydrocarbons in this video made from imagery and data collected by NASA's Cassini spacecraft.
_________________