Astronomers using the Atacama Large Millimeter/submillimeter Array (ALMA), in which ESO is a partner, have spotted a peculiar gas cloud that resulted from a confrontation between two stars. One star grew so large it engulfed the other which, in turn, spiralled towards its partner provoking it into shedding its outer layers.

Like humans, stars change with age and ultimately die. For the Sun and stars like it, this change will take it through a phase where, having burned all the hydrogen in its core, it swells up into a large and bright red-giant star. Eventually, the dying Sun will lose its outer layers, leaving behind its core: a hot and dense star called a white dwarf. 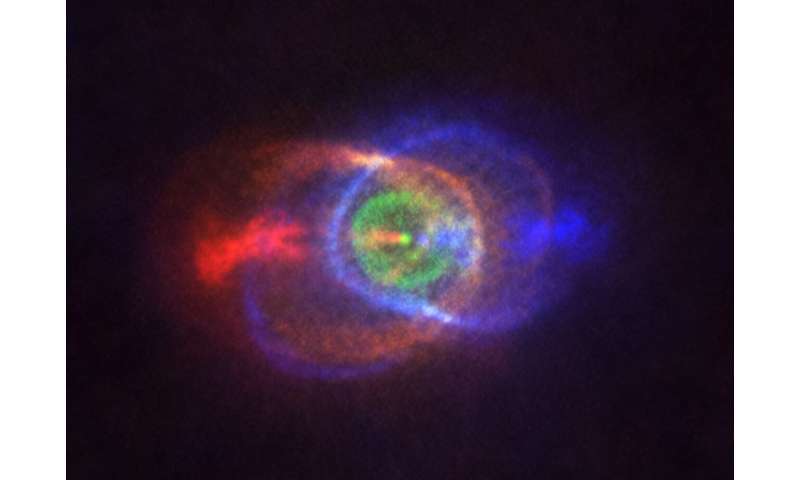 This new ALMA image shows the outcome of a stellar fight: a complex and stunning gas environment surrounding the binary HD101584. The colours represent speed, going from blue -- gas moving the fastest towards us -- to red -- gas moving the fastest away from us. Jets, almost along the line of sight, propel the material in blue and red. The stars in the binary are located at the single bright dot at the centre of the ring-like structure shown in green, which is moving with the same velocity as the system as a whole along the line of sight. Astronomers believe this ring has its origin in the material ejected as the lower mass star in the binary spiralled towards its red-giant partner.